To determine this, Giggster looked at the IMDb ratings for all Nicole Kidman movies and ranked the top 25 according to users, with ties broken by votes. For the film to qualify, Kidman had to appear in the movie in more than just a cameo part.

Kidman has appeared in a range of different genres of film—running the gamut from superhero blockbusters to eerie family dramas—and has forged rapports with such directorial collaborators as Stanley Kubrick, Jane Campion, Park Chan-wook, and Gus Van Sant, among others. Yet even the most true-blue Kidman lover might be surprised to see which of her 70-plus movies made the cut on this list.Keep reading to see just which films are the best of Kidman’s abiding career. 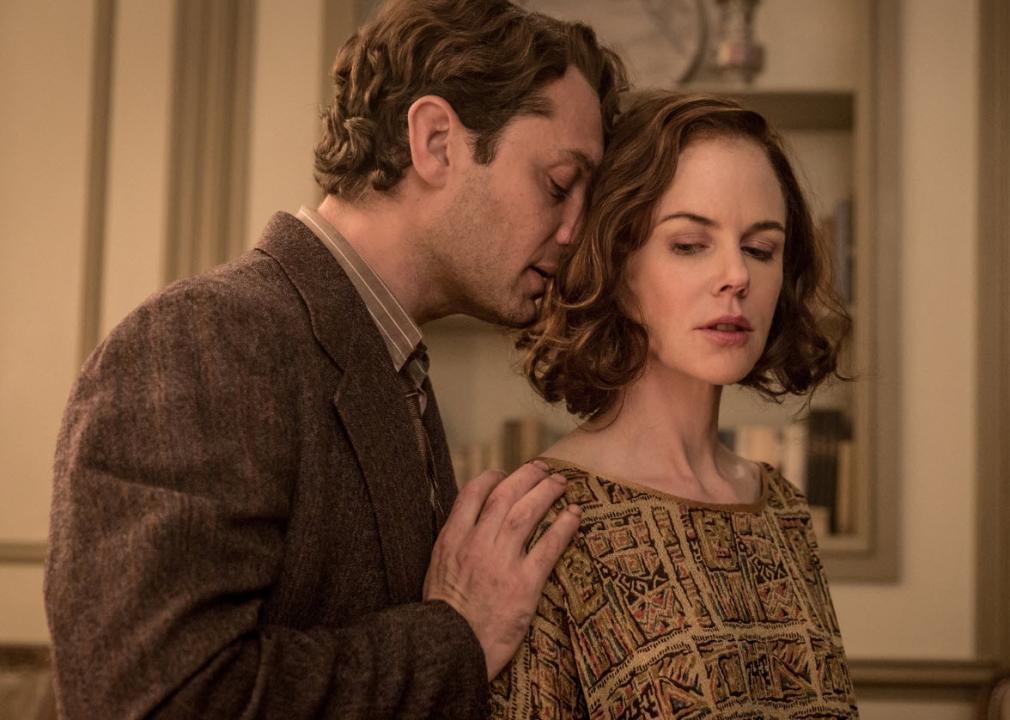 The relationship between Maxwell Perkins (Colin Firth), the book editor who helped launch the celebrated careers of Ernest Hemingway and F. Scott Fitzgerald, and notoriously long-winded novelist Thomas Wolfe (Jude Law) takes center stage in this biopic. Here, Kidman plays Aline Bernstein, a theater set and costume designer made famous for being Wolfe’s real-life muse. Something interesting about this on-screen coupling is that Wolfe was 20 years younger than Bernstein in real life, while there’s only a five-year age gap between Kidman and Law. 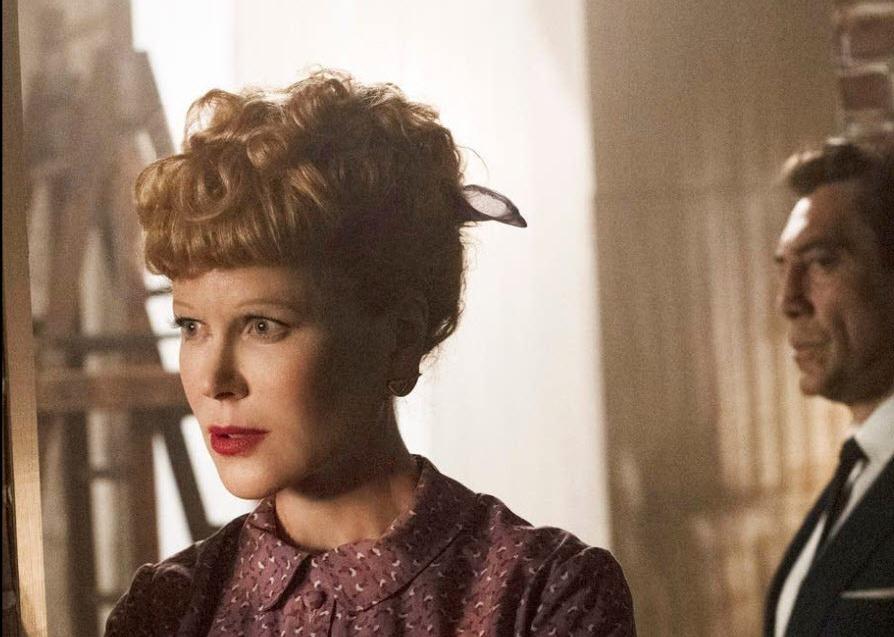 Speaking of biopics, this Lucille Ball and Desi Arnaz (Javier Bardem) biopic turned heads during the 2021 awards season, particularly due to Kidman’s stunning transformation as the comedienne. The film documented the relationship between Ball and Arnaz, from their first meeting to their eventual divorce. Kidman, in particular, received rave reviews for her turn in the feature film, even earning herself an Academy Award nomination for Best Actress in 2022. 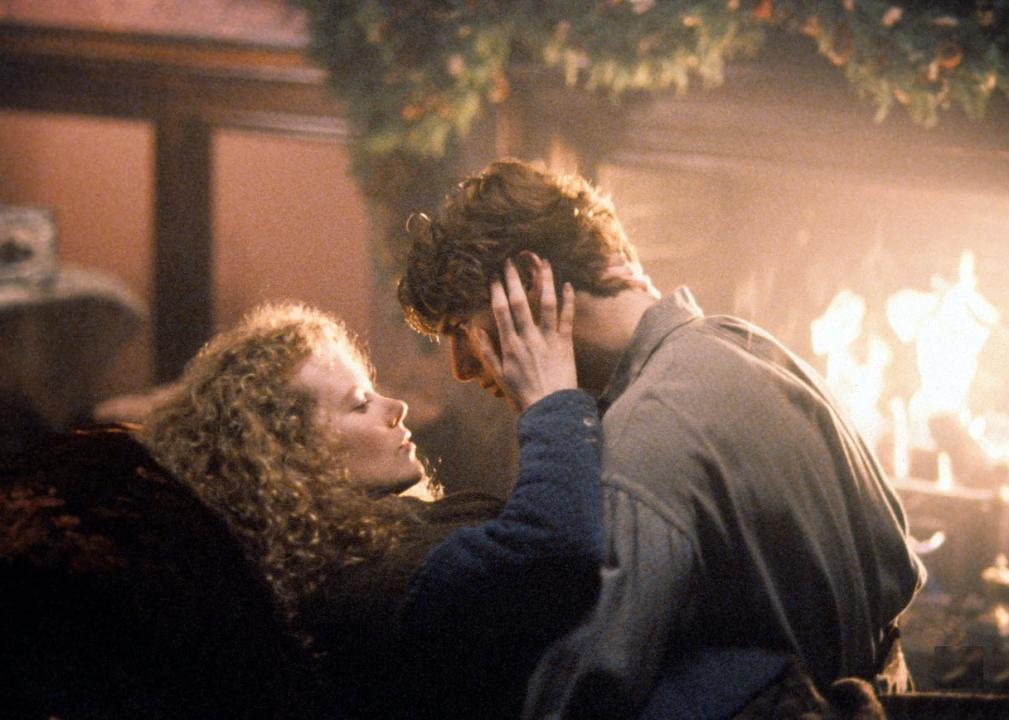 Set during the lead-up to the Land Run of 1893, “Far and Away” follows two Irish immigrants who find love and set off for America to acquire their own land. Kidman played one such immigrant named Shannon opposite her then-husband Tom Cruise. The two met in 1989 during the production of “Days of Thunder,” making “Far and Away” their second film together. Irish singer Enya provided the soundtrack theme “Book of Days.” 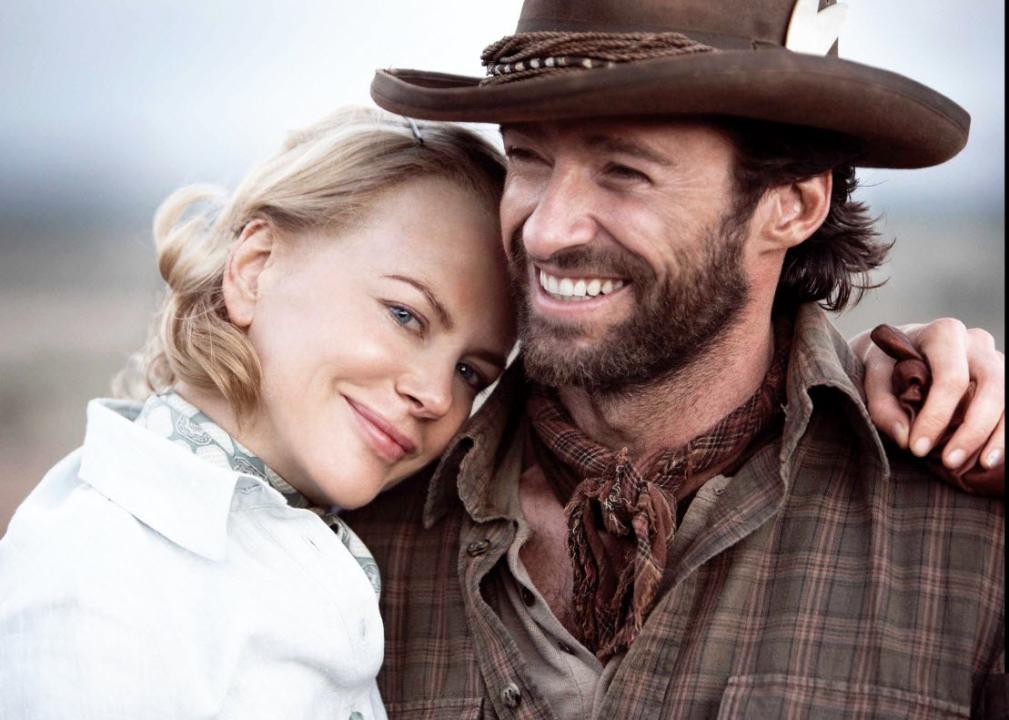 Taking place between 1939 and 1942, “Australia” recounts a turbulent love story set against the backdrop of World War II and how the titular country was pulled into the conflict. Kidman plays Lady Sarah Ashley, a wealthy English woman who moves to Australia to live on a cattle ranch she inherited from her murdered husband. While there, she falls in love with the property’s drover (Hugh Jackman) and finds herself in the midst of potential war destruction at the hands of Japanese bombers. This tear-jerker follows a terminally ill man named Bob (Michael Keaton) who realizes he might not survive his cancer long enough to see his unborn child. As a result, he begins making videos about himself so that his child can eventually watch them while also trying to fix his strained relationship with his immigrant family. Kidman plays Bob’s wife, Gail, who supports him during his illness and ventures while pregnant with their first child. 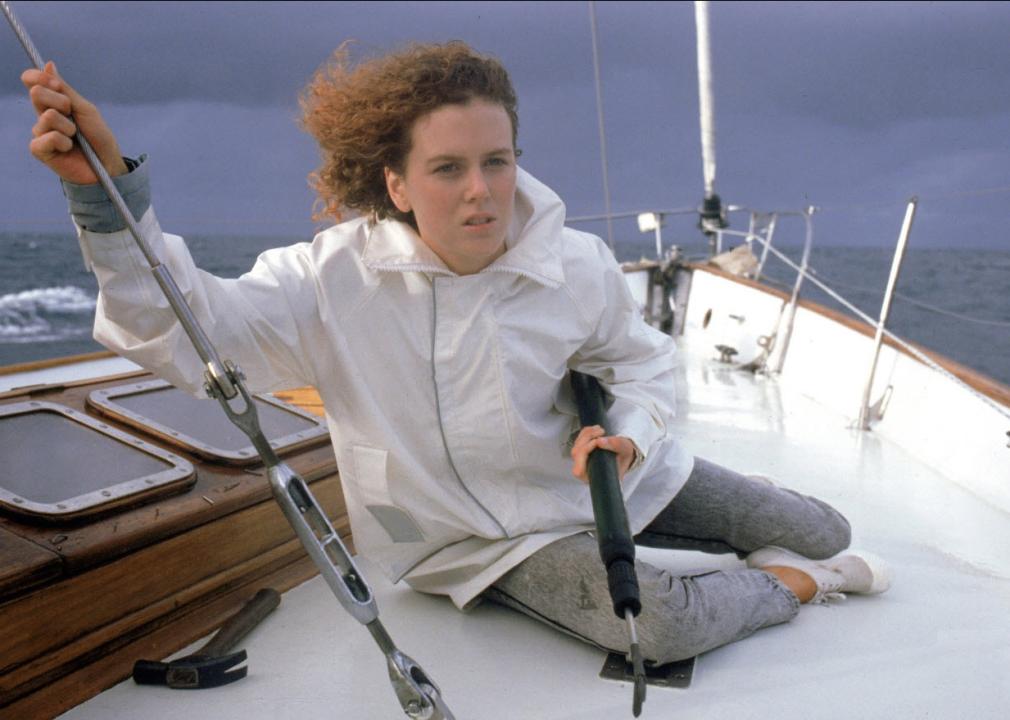 Notable for being one of the last strictly Australian movies Kidman ever made, “Dead Calm” is a psychological thriller based on Charles Williams’ 1963 novel of the same name. A grieving couple decides to spend some time at sea, but their time together quickly turns dangerous after a mysterious man said to have escaped a sinking ship comes on board. Kidman plays Rae, the wife of Sam Neill’s John, who is grieving the death of their son. 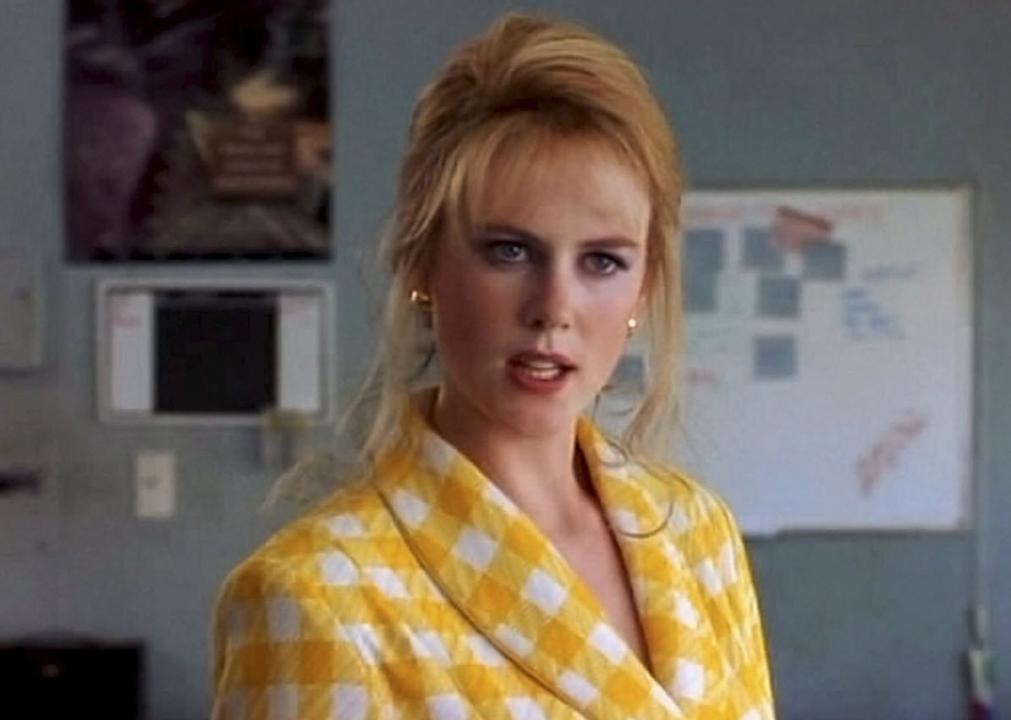 This Gus Van Sant classic tells the story of a woman who would do anything to get the job she wanted. The woman in question, Suzanne (Kidman), wants to become the star news anchor at her television station in this adaptation of Joyce Maynard’s novel. Both the novel and the movie take inspiration from the real-life crimes committed by Pamela Smart, especially plot lines regarding Suzanne seducing and manipulating her teenage documentary subject Jimmy (Joaquin Phoenix). Park Chan-wook’s English-language debut is a striking film centering around a strange young woman named India (Mia Wasikowska) who becomes embroiled in the mystery of what actually happened to her father (Dermot Mulroney). Here, Kidman portrays Evelyn, the emotionally unstable mother of India, in a role that saw her use seemingly every emotion in existence. It premiered at Sundance in 2013 and has had a steady cult following since its release. “Bombshell” took on the Fox News sexual harassment scandal that broke in 2016, specifically centering on the stories of Megyn Kelly (Charlize Theron in an Oscar-nominated turn) and Gretchen Carlson (Kidman) in their legal battles against the network. Although she didn’t earn an Academy Award nomination like costars Theron and Margot Robbie, Kidman earned a Screen Actor’s Guild Award nomination for her depiction as Carlson. 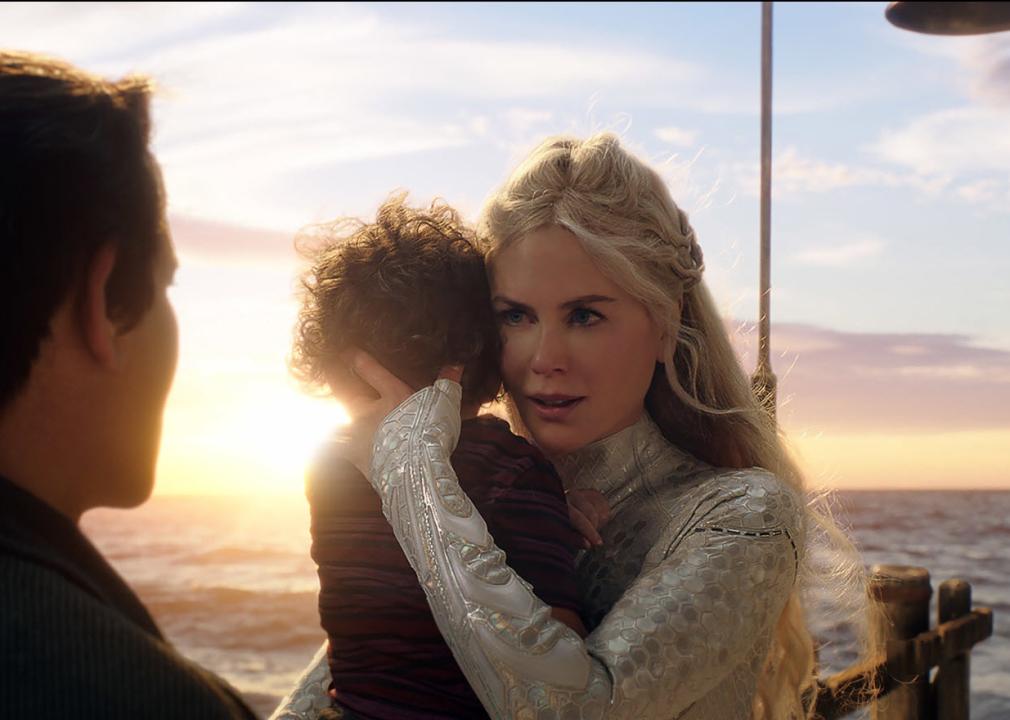 While not her first foray into big-budget movies, “Aquaman” marked the first superhero blockbuster Kidman has starred in. Based on the DC Comics superhero of the same name, the movie follows its titular character (Jason Momoa) as he learns about his past and seeks to defeat his evil half-brother Orm (Patrick Wilson) from destroying the surface world. A critical part of his past involved his mother, Queen Atlanna, portrayed by Kidman. 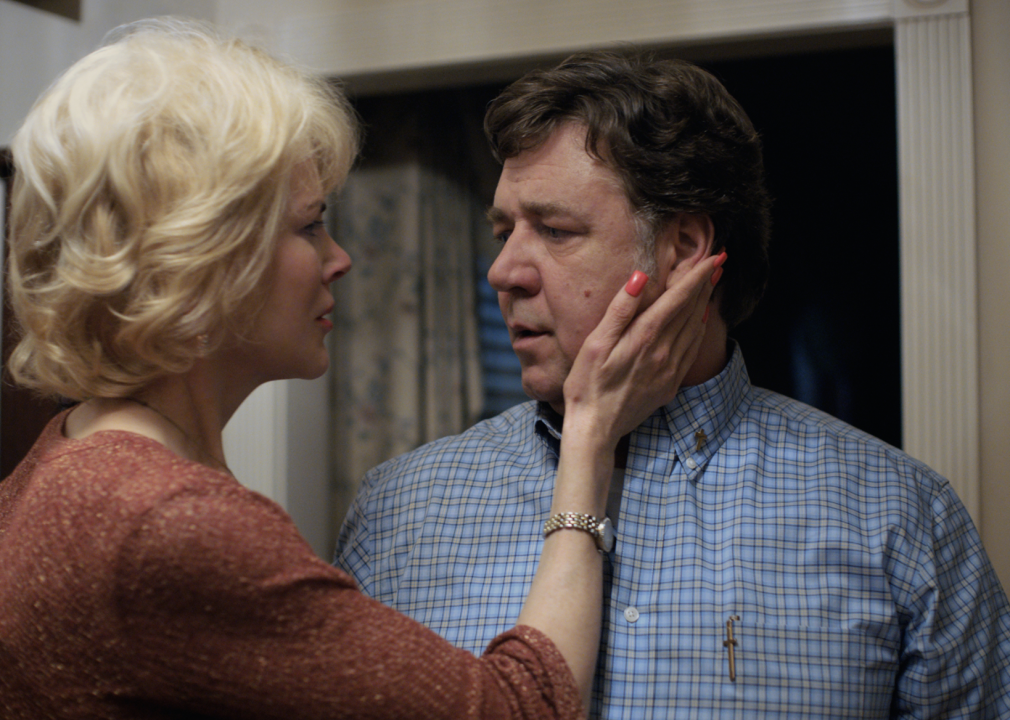 This intense drama follows the realities of conversion therapy on LGBTQ+ youth based on the real-life experiences of an activist survivor of the controversial Love in Action program. A young man named Jared (Lucas Hedges) finds himself enrolled in a program at LIA by his homophobic father, enduring abuse as the program continues. Kidman portrays Nancy, Jared’s mother, who participates in the program initially but becomes skeptical of its methods. 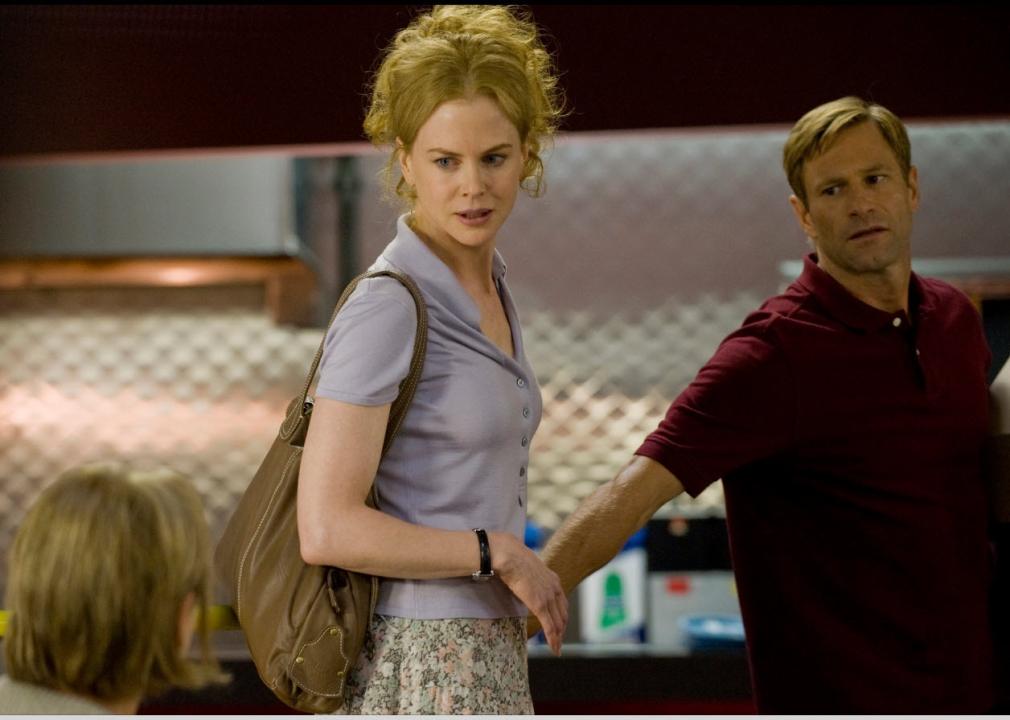 This adaptation of David Lindsay-Abaire’s Pulitzer Prize-winning play dissects the complicated grieving process that comes after a sudden death. In the case of the film’s main couple, portrayed by Kidman and Aaron Eckhart, the death is of their 4-year-old son, whose passing makes their life without him all the more complex. Kidman, who plays grieving mother Becca, was nominated for several awards for her performance, including an Academy Award, a Golden Globe Award, and a Screen Actors Guild Award, among others. 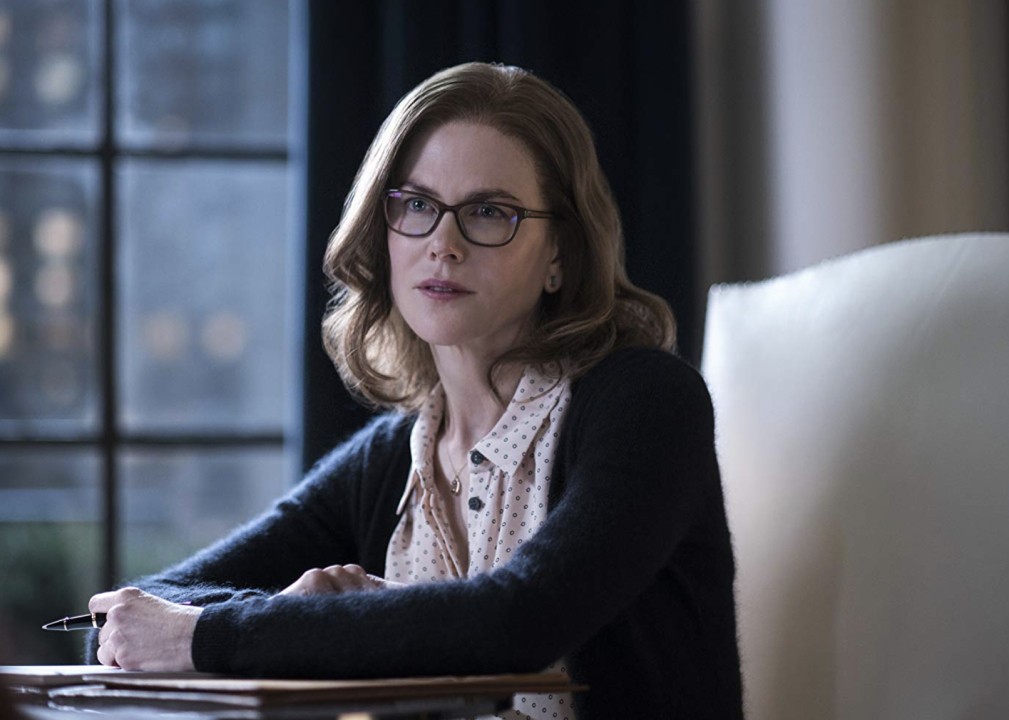 “The Upside” was the third remake of the critically acclaimed French film “The Intouchables,” and many of the same elements remained. It centers around the burgeoning friendship between the recently released convict Dell (Kevin Hart) and the paralyzed billionaire Phillip (Bryan Cranston), whom Dell is hired to take care of. Kidman plays Yvonne, the personal assistant to Phillip, who initially objects to Dell’s hiring but eventually takes a liking to him. 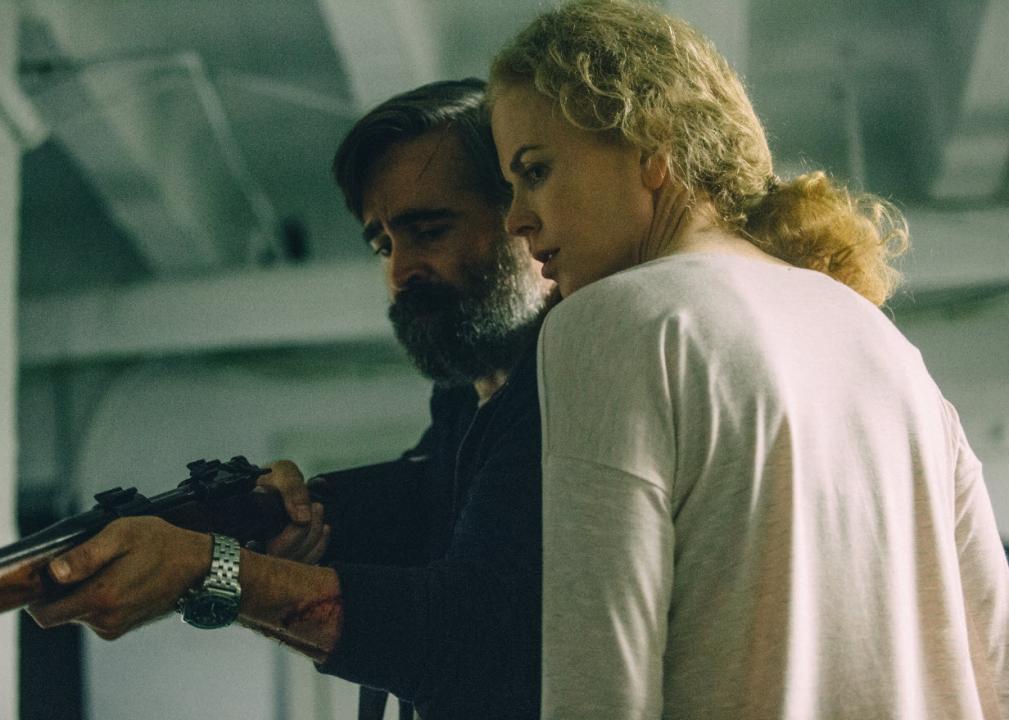 This eerie and bizarre film had many twists but was still compelling enough to watch to the very end. “The Killing of a Sacred Deer” is based loosely on the Greek play “Iphigenia in Aulis,” which focuses on a family’s downfall when its doctor patriarch (Colin Farrell) takes in a strange young man (Barry Keoghan). Kidman plays opposite Farrell as the mother of the family who gets drawn into the mystery of the house guest and the havoc he is silently wrecking on their lives. 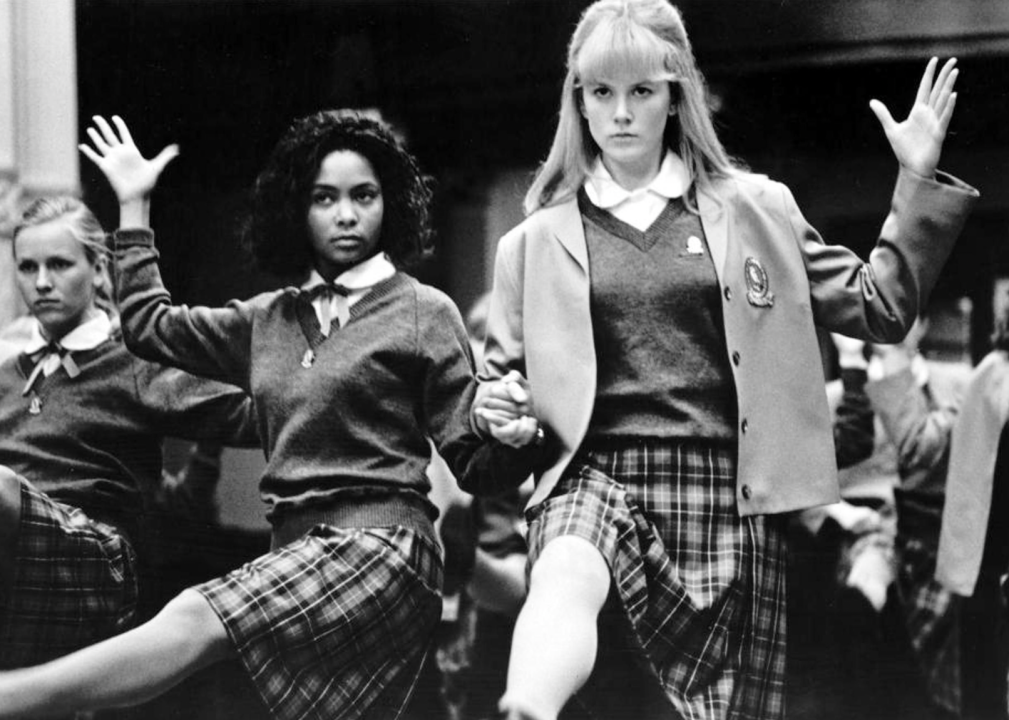 This semi-autobiographical coming-of-age story is the second in an unofficial series by director John Duigan, sharing the same main character of a young boy named Danny (Noah Taylor). In this entry, Danny has been sent away to a boarding school where he meets Thandiwe (Thandiwe Newton) from a nearby all-girls school. The relationship is noticed by the all-girls school’s prefect, Nicola, portrayed by Kidman. 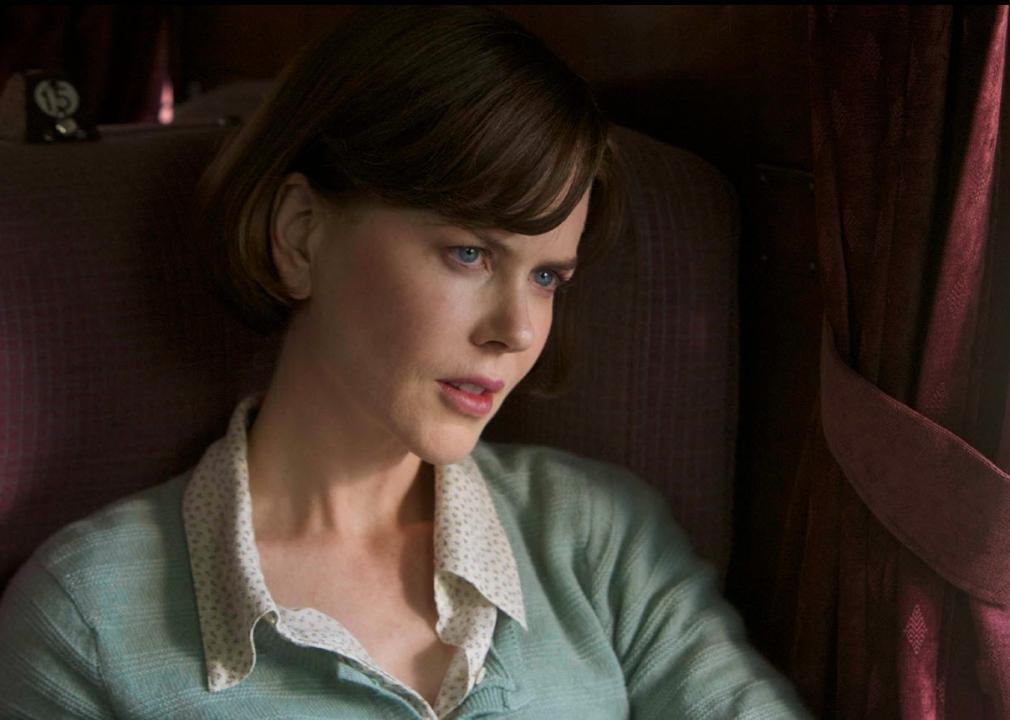 Based on the 1995 autobiography by Eric Lomax, “The Railway Man” follows a former British officer (Colin Firth) as he travels to Thailand to confront one of the Japanese Army members (Hiroyuki Sanada) who tortured him during World War II. During his imprisonment at the prisoner of war camp, Lomax was forced to provide labor for the Burma Railway. Kidman played a critical role in the film as Lomax’s wife, Patricia, who shares his interest in trains and railroads. 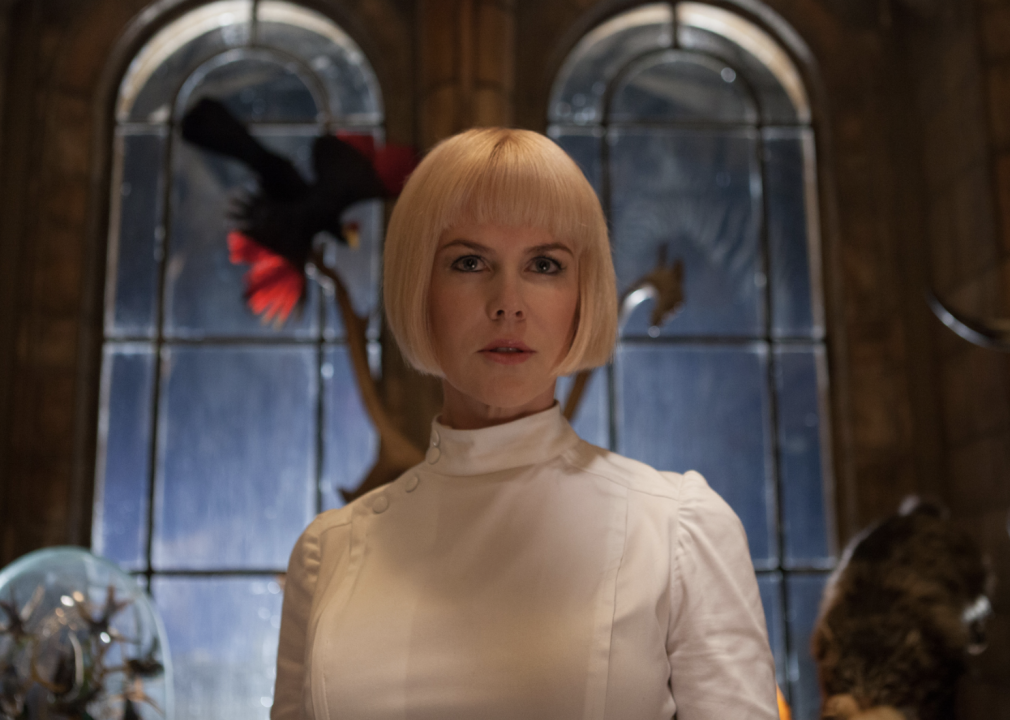 A feel-good classic for both families and individuals alike, “Paddington” tells the story of the titular spectacled bear (Ben Whishaw) who travels from “darkest Peru” to London. Along the way, he meets the Brown family, who takes him in—albeit not without their fair share of villainous or strange encounters. Kidman plays the evil taxidermist Millicent, who is determined to add Paddington to her vast collection. 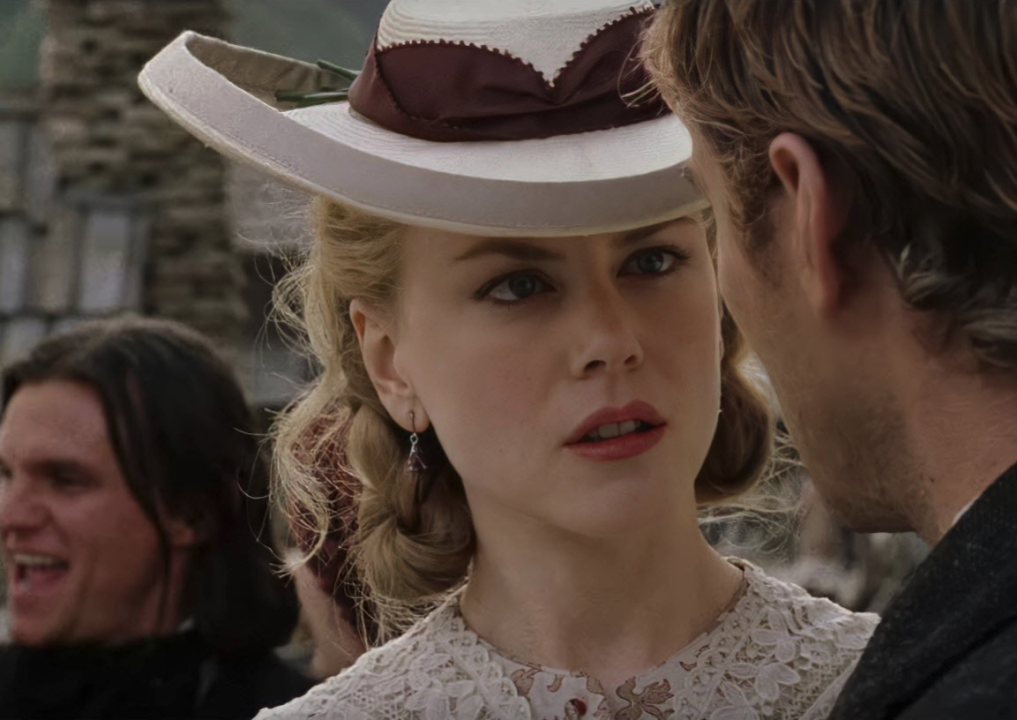 This Civil War epic, an adaptation of the titular 1997 novel by Charles Frazier, tells the story of Confederate deserter Inman (Jude Law) trying to make it back home to his lover (Kidman) alive. Throughout the journey, he encounters various characters who cause him to rethink what he was really fighting for, all while not knowing that his lover is experiencing deadly problems of her own. Kidman plays Inman’s sweetheart, Ada, who is trying to keep their home secure during the turbulent end of the Civil War. 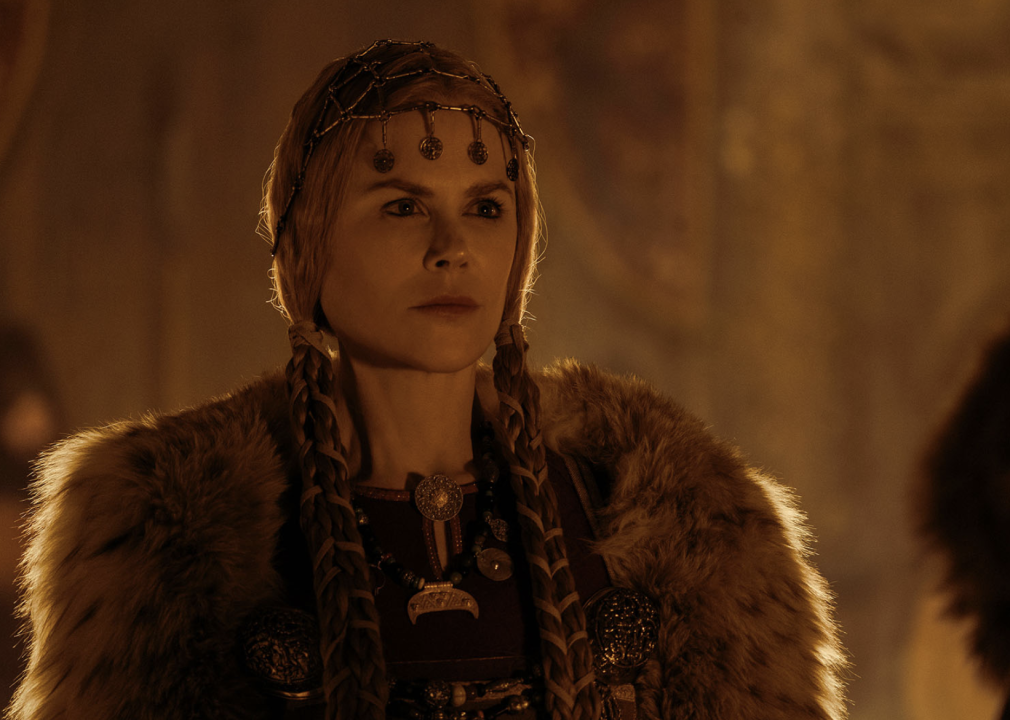 The most recent film on this list, “The Northman” is a historical epic that drew critical acclaim for its well-acted ensemble of characters. The movie follows the Scandinavian legend of Amleth (Alexander Skarsgård), who goes on a quest to avenge the death of his father at the hands of Fjölnir the Brotherless. In the film, Kidman portrays Queen Gudrún, the mother of Amleth. 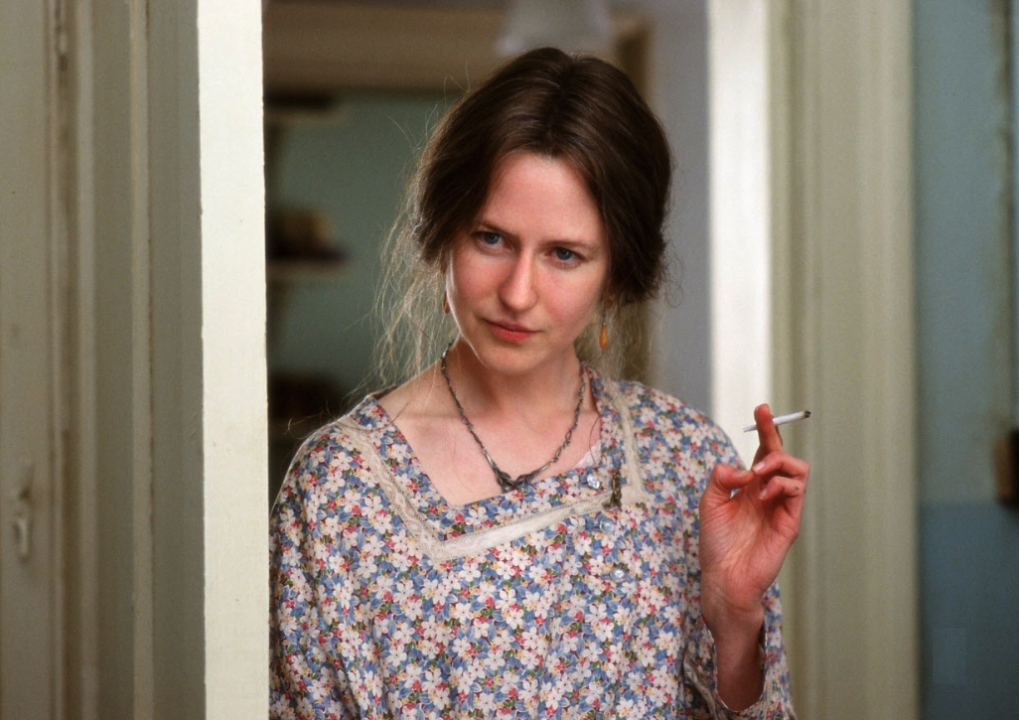 In this film adaptation of the Pulitzer Prize-winning novel, the lives of three women from different decades become intertwined thanks to the Virginia Woolf novel “Mrs. Dalloway.” Among these women is Woolf (Kidman) herself, who is struggling with depression while completing the novel; an unhappy housewife in 1951; and a caretaker in 2001. Kidman portrayed Woolf to universal acclaim, earning her the Oscar for Best Actress. 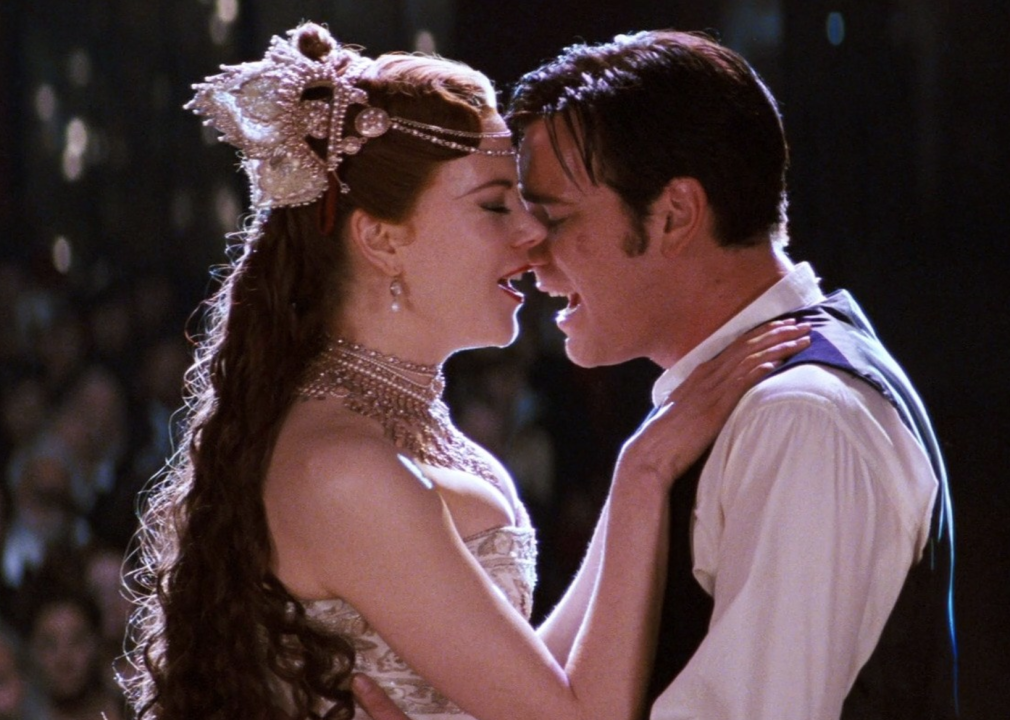 This extravagant story of truth, beauty, freedom, and love takes place in 1899 Paris, centering around the titular cabaret and its place in the burgeoning Bohemian movement. A young writer named Christian (Ewan McGregor) recounts the love affair he had with a performer at the cabaret amidst a flurry of overwhelming visuals and modern songs. Here, Kidman portrays Satine, the performer and courtesan who falls in love with Christian before meeting a tragic end. 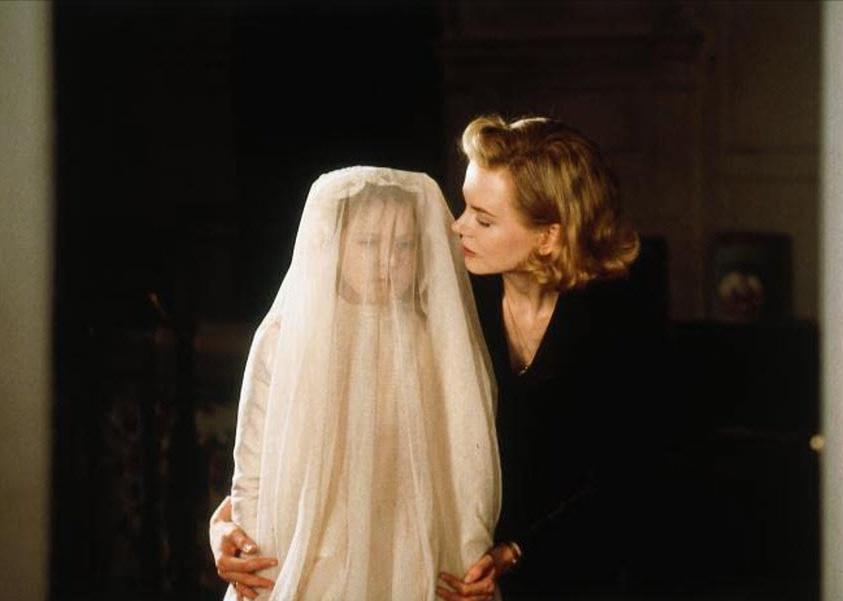 A secluded mansion on a French island is the perfect setting for a dreary Gothic horror, and “The Others” illustrates why. A widow with two ailing children lives at the mansion at the end of World War II, and they begin experiencing eerie occurrences after the family hires three new housekeepers. Kidman plays the grieving widow and mother Grace in a role that secured her a Golden Globe nomination for Best Actress in Drama. 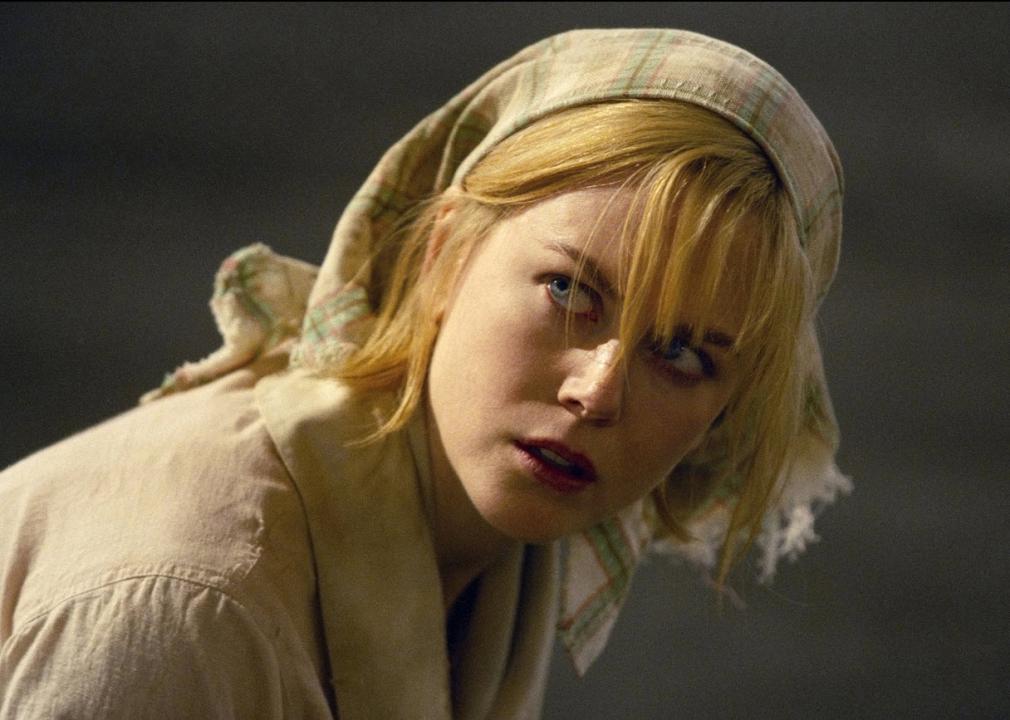 “Dogville” often plays more like a stage performance rather than a film, and that is by design. A woman in hiding from the Mob (Kidman) arrives in the titular Colorado town and agrees to help a rotating cast of townspeople in exchange for sanctuary. Kidman plays Grace, the secluded woman who does all she can to ensure the safety of herself and those around her. 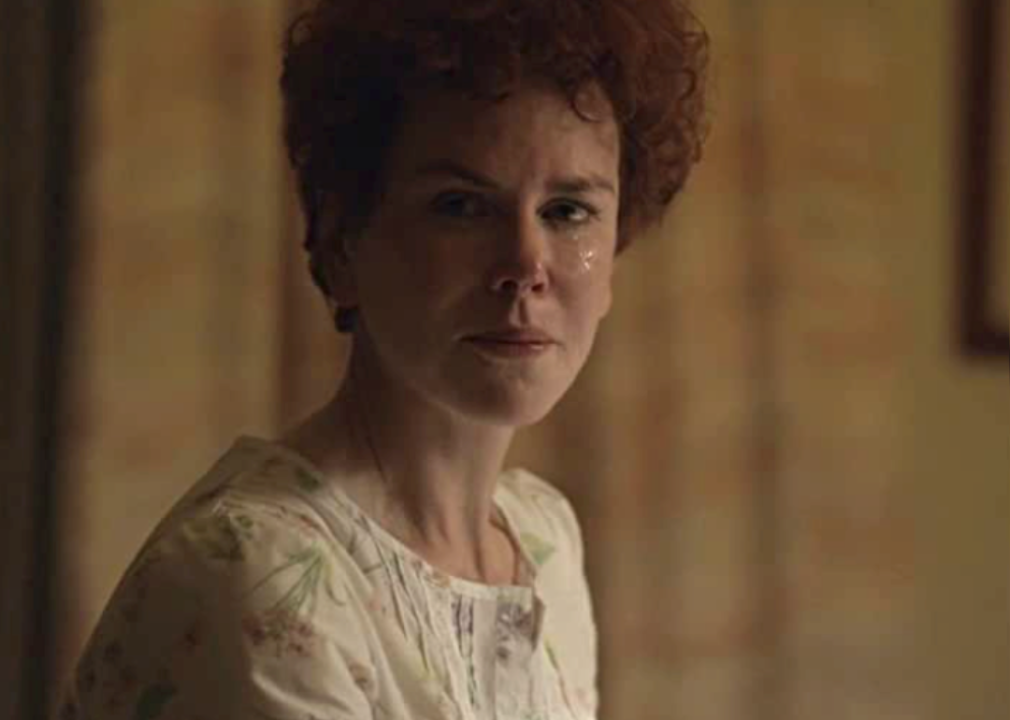 This emotional real-life story tells the tale of a young Indian man named Saroo (Dev Patel) who is accidentally separated from his family as a child. After being mistakenly adopted by an Australian couple, he returns to his hometown of Khandwa, India, as an adult to reunite with the family he had lost. Kidman starred alongside Patel as Sue, Saroo’s adoptive mother, who is shocked but supportive of her adopted son’s journey.

This story originally appeared on Giggster and was produced and
distributed in partnership with Stacker Studio.