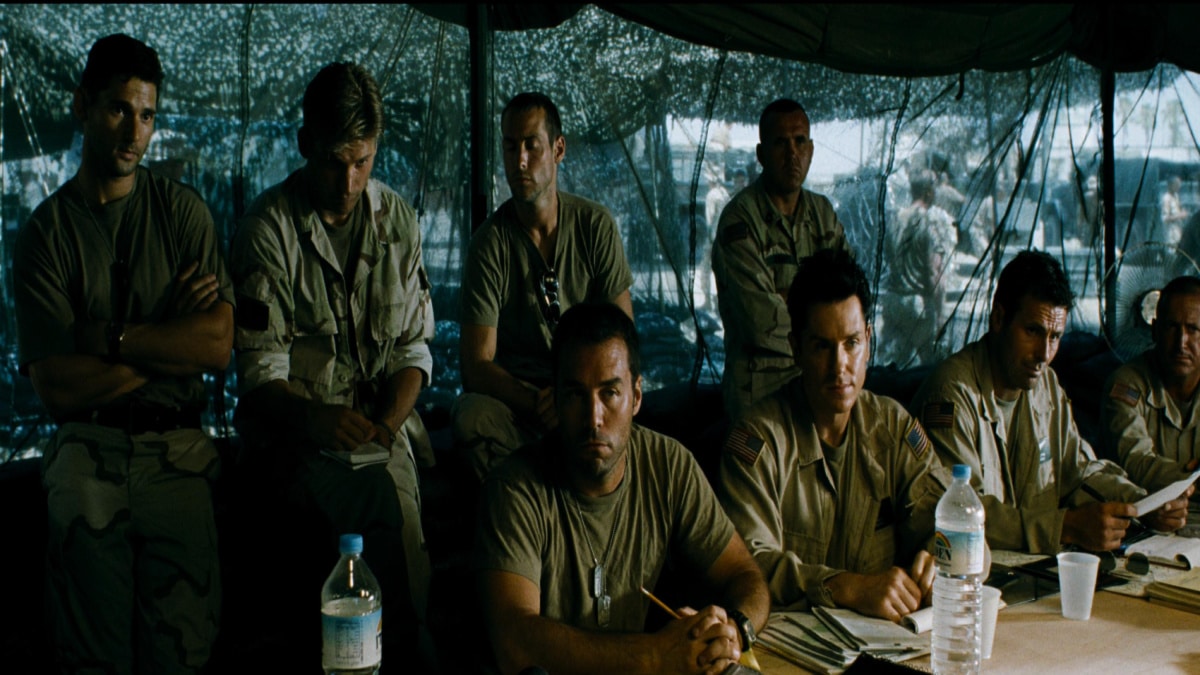 Some of the finest movies are based on actual events. People like true stories because they feel like they live vicariously through the big screen characters. They can immerse themselves in the story and feel all the emotions that come with it.

Watching war movies based on true stories opens our eyes to past tragedies and victories. Something about the action, suspense, and drama hook us in, like a good book.

We have compiled a list of the ten best war movies based on true stories that will keep you entertained.

The Best War Movies Based on True Stories List

Platoon is a 1986 American war movie widely praised for its accurate representation of the war. Informed by director Oliver Stone’s own experiences in Vietnam, Charlie Sheen and Willem Dafoe give standout performances as two men torn between duty and bloodshed.

The film tells the story of Chris Taylor (Charlie Sheen), a young American who is drafted into the Vietnam War. He arrives in Vietnam and is thrust into the middle of the action. However, he soon realizes that the war is not what he expected it to be.

The animosity between Chris’s two sergeants quickly develops into a battle among their soldiers as well as against the enemy.

All the actors had to complete a two-week basic training in the Philippines before filming began. Stone’s goal was not for them to become closer and operate as a unit; instead, it was to deprive them of sleep and make them exhausted so that they would be burnt out and thus in character. Three cast members in the film were actual Vietnam war veterans.

Saving Private Ryan is a war movie inspired by actual events. Set during the Second World War, the film follows a group of soldiers sent on a mission to save one man – Private Ryan. Ryan is the last of his four brothers to be still alive and fighting in the war, and they want to bring him home.

The film depicts the real-life brutality that occurred around the time of the Normandy Landings on June 6, 1944. It is inspired by actual footage from the 1940s, modeled by modern camera lenses.

The movie is based on the Niland brothers, who served in the U.S. army when three of the four were thought to be killed in action. Fortunately, one was found escaping a Japanese prison camp, so two of the brothers actually survived the war.

Full Metal Jacket is based on “The Short Timers,” a semi-autobiographical novel by Gustav Hasford. Hasford used his real-life experiences in Vietnam to write the story and help in its film adoption. The book was so brutally macabre that its third and final section never made it to the screen.

A war drama movie set during the Vietnam War, this partially true story follows a group of U.S. Marines going through rigorous training and then fighting in the war.

The film creates a realistic picture of the Vietnam War and how it affected the soldiers who fought in it. It includes several fictitious characters who encounter difficult circumstances and moral dilemmas.

The film combines the book’s thought-provoking language and emotional aspects to produce a unique, visually compelling portrayal of the war.

Black Hawk Down is a 2001 war film based on the 1999 non-fiction book of the same name by Mark Bowden. The movie tells the story of the Battle of Mogadishu in Somalia during the U.S. military raid on October 3, 1993.

The book and film recount the events of a raid by 160 United States Rangers and Delta Force on a Somalian compound in the capital Mogadishu to capture two lieutenants of warlord Mohamed Farrah Aidid, who had proclaimed himself president.

The raid turned into a disastrous 15-hour battle that resulted in the deaths of 18 Americans and hundreds of Somalis.

Actual footage demonstrates that the film accurately depicted the events in Mogadishu, Somalia, in 1993. Real militia and U.S. rangers shed light on the conflict when Aidid ruled Somalia.

The Pianist is a war film based on the true story of Wladyslaw Szpilman, a Polish Jew who was a renowned pianist. The film follows his struggles during the Nazi occupation of Poland and how he managed to survive the Holocaust.

Szpilman hid for two years in Warsaw and was even helped by a German officer who rejected the Nazi policies. The film is a harrowing tale of survival and human nature.

Adrien Brody, the actor who played the pianist, suffered from depression, or what he described as “mourning,” for a year after filming the disturbing events of the movie.

We Were Soldiers is a war movie that follows the Battle of Ia Drang in 1965, the first significant engagement between the United States Army and the People’s Army of Vietnam (PAVN).

While some details were changed for the film, it is still said to best capture the realism of the Vietnam war. Even some of the actors cast were members of the North Vietnamese army, which must have brought back some intense memories.

We Were Soldiers follows Lieutenant Colonel Hal Moore (played by Mel Gibson) and the bloody battle between the U.S. and North Vietnamese soldiers. The movie is an emotional rollercoaster, depicting the horrors of war and the bond between soldiers.

The movie Letters from Iwo Jima reveals the true story behind Japanese troops who fought the United States during the Second World War.

It is inspired by Kumiko Kakehashi’s book of the same name, which contains actual letters sent home by the Japanese troops. The movie follows the story of the Battle of Iwo Jima from the perspective of the Japanese soldiers.

At the heart of the story is the maverick general Tadamichi Kuriyabashi (Ken Watanabe), a brilliant commander with extraordinary military skills and a devoted family man. He knew that the soldiers had no chance of survival.

The general was unique because he liked America and disagreed with going to war against them. He did everything in his power to delay the American troops from their attack.

Clint Eastwood also directed the movie Flag of Our Fathers, which tells the U.S. side of the story.

American Sniper is an action drama that follows the story of Chris Kyle, played by Bradley Cooper, who is considered the most lethal sniper in U.S. military history.

The film depicts his time as a Navy SEAL during the Iraq War and how he became known as “the Legend.” It also shows the toll war takes on a person and how it can affect their family and friends.

The film stays true to the relationship between Chris Kyle and his wife Taya (played by Sienna Miller) and the strains the war caused on their relationship.

Hacksaw Ridge is a true story set during World War II. The movie follows the story of Desmond Doss, played by Andrew Garfield, who vowed never to use violence again when he almost killed his brother in his youth. He becomes a medic in the army and is sent to the Battle of Okinawa.

Most of the movie was historically accurate, including Doss’s objection to carrying a weapon and his heroic acts in saving the lives of others. Although he is a pacifist, Doss manages to save the lives of around 75 soldiers during the battle. He was even awarded the Medal of Honor for his actions.

The movie does an excellent job of depicting the horrors of war and how one man can make a difference.

Dunkirk is a war movie based on the Dunkirk evacuation during World War II. The film follows the story of stranded allied soldiers at the French beach of Dunkirk and how a fleet of civilian boats evacuated them.

Dunkirk veterans described the battle of Dunkirk as “hell on Earth” as German warplanes attacked the trapped soldiers every half hour with waves of ME109s and Stuka 87s. The Dunkirk evacuation, code-named Operation Dynamo, occurred between May 27 and June 4, 1940. More than 330,000 French, British, Belgian, and Dutch soldiers were safely welcomed on board.

The film was as historically accurate as the budget would allow. The city of Dunkirk gave its permission to use the beach where the real-life event occurred. A few living veterans of Dunkirk commended the film for its accuracy.

Movies based on true stories provide an interesting perspective of horrific events that occurred in the past. They also offer viewers a chance to learn more about history. These factual movies are educational, entertaining, and frequently heart-wrenching.

The ten movies mentioned are just a few of the many excellent war movies based on true stories. Which movies have you seen?