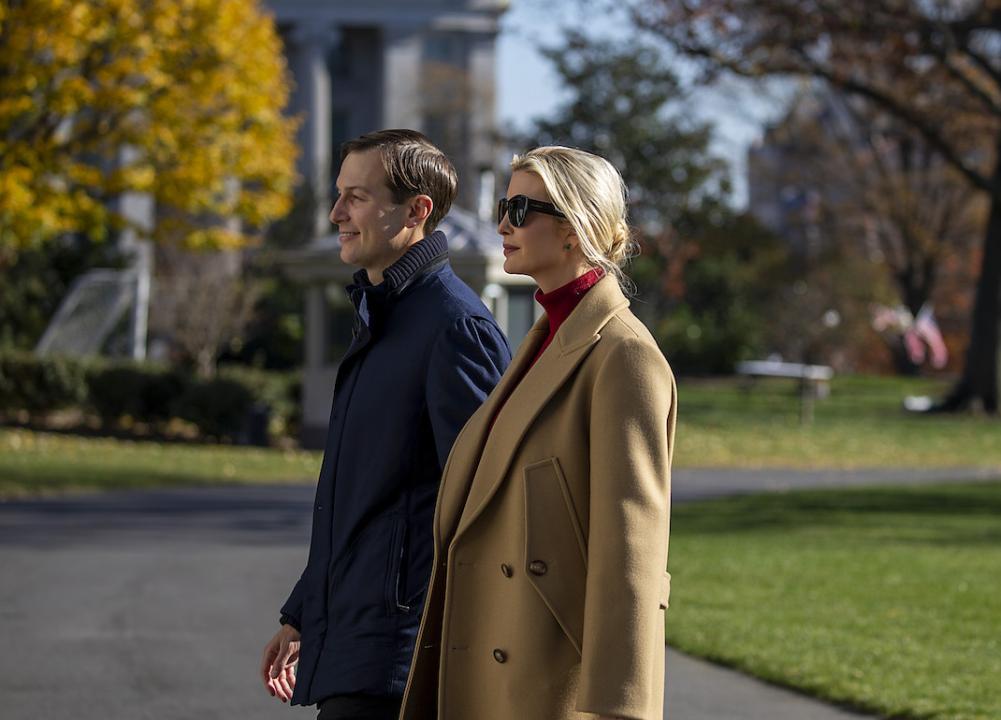 The Richest Celebrity Couples in the World

Celebrity power couples hold the fascination of many people. How these couples manage to bring such large amounts of money into a nuclear unit while standing firmly rooted in their love for each other can seem both inspiring and unattainable—or at least from an outsider’s perspective.

In a COVID-19 world—where stadiums are starting to fill up again and TV shows are getting into the swing of regular production schedules—many celebrities have ventured into other lines of business, such as investments and real estate to add to their earning portfolio.

Top-earning celebrities on this list include Jada Pinkett Smith and Will Smith, who outside of acting have collectively invested millions worth in real estate. There’s also Katy Perry and Orlando Bloom, the singer-actor couple who made their share of money through tours and property ownership. We can’t forget the legendary Tina Turner and Erwin Bach, who left the U.S. in pursuit of European living, racking up a real estate portfolio of their own.

Stacker took a look at the richest couples in the world and ranked the top 21, according to Celebrity Net Worth. Here’s a look at some of your favorite celebrity couples and how they’ve accumulated their wealth.

You may also like: 50 most physical jobs in America 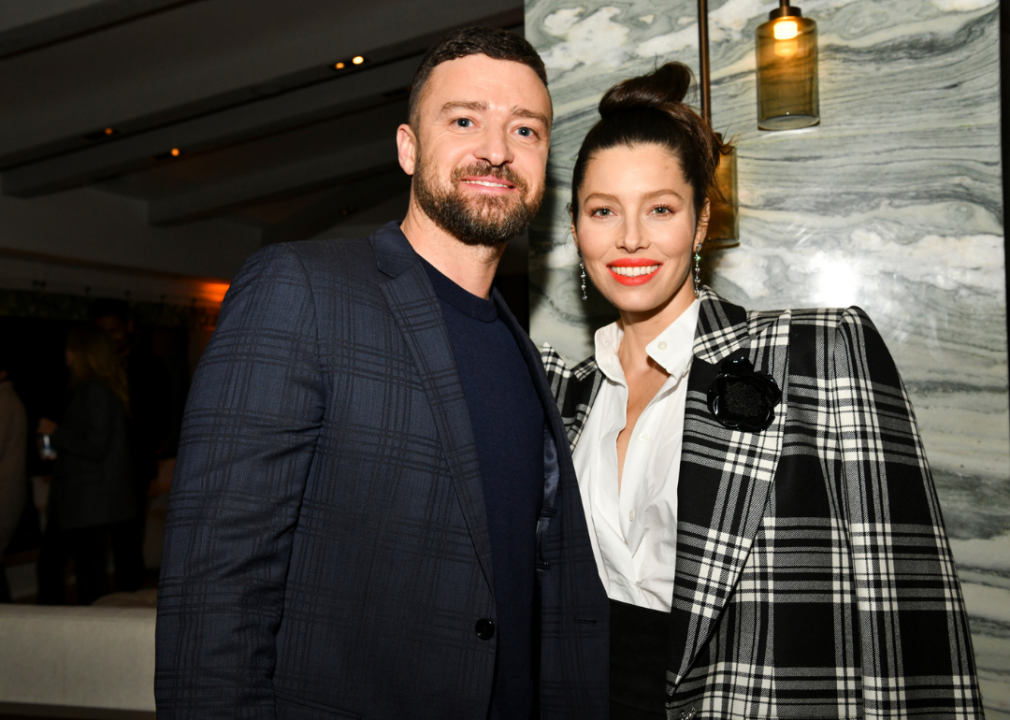 Justin Timberlake and Jessica Biel both have achieved unparalleled success, with Justin being a singer, songwriter, actor, and founder of the clothing line William Rast. Biel has also starred in films and also dabbled in the business world, helping to launch Kinderfarms, a health and wellness brand for families. 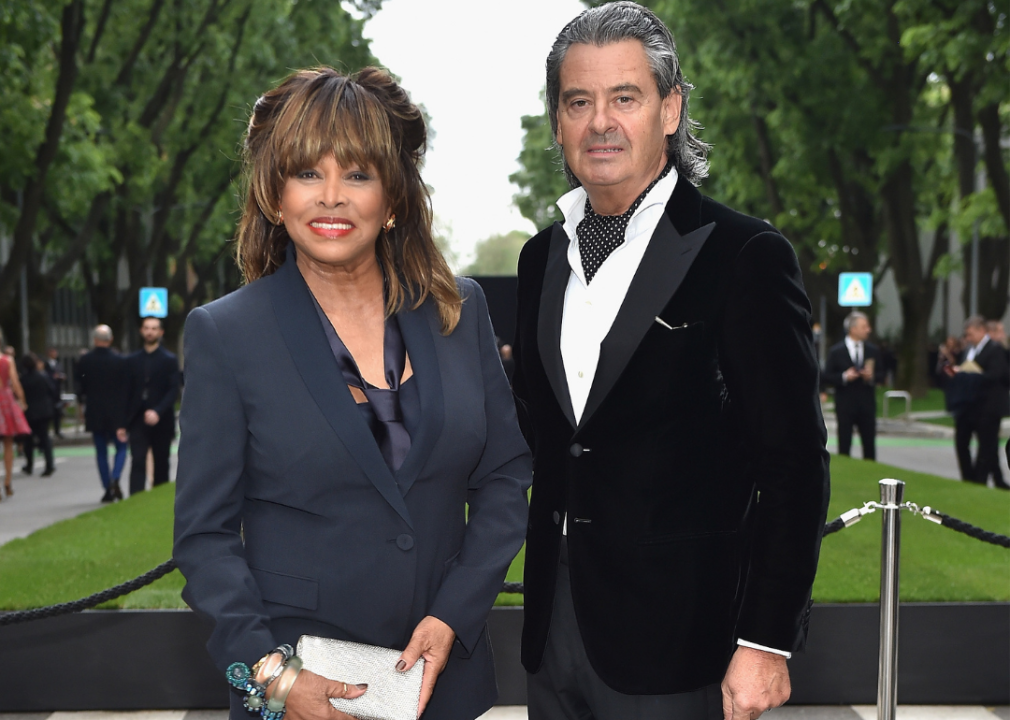 Legendary singer Tina Turner may have retired from performing live, but she is still a top earner. She’s worth $250 million alone from music sales and real estate, carrying most of the net worth between her and her spouse. Turner and her husband, Erwin Bach, a music producer, have been living in Switzerland for years where they purchased an estate for $76 million in 2022. 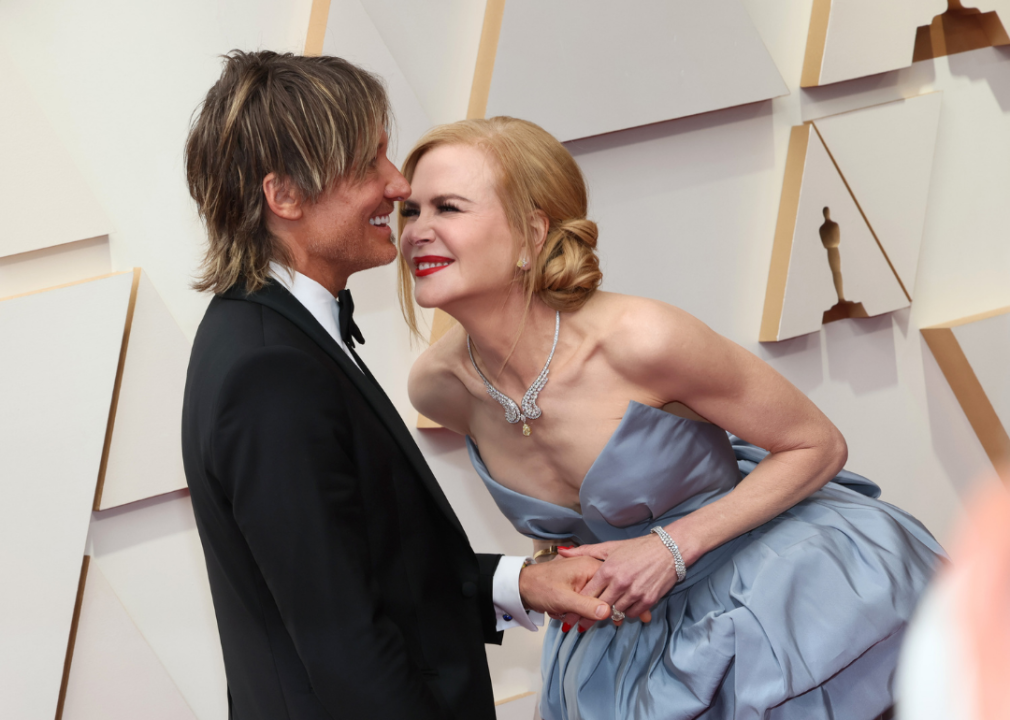 Since their union in 2006, Nicole Kidman and Keith Urban have gone on to dominate in their fields. Nicole Kidman alone is worth $250 million, mostly from acting in movies. Together, Kidman and her musician husband Urban, own $30 million worth of real estate. 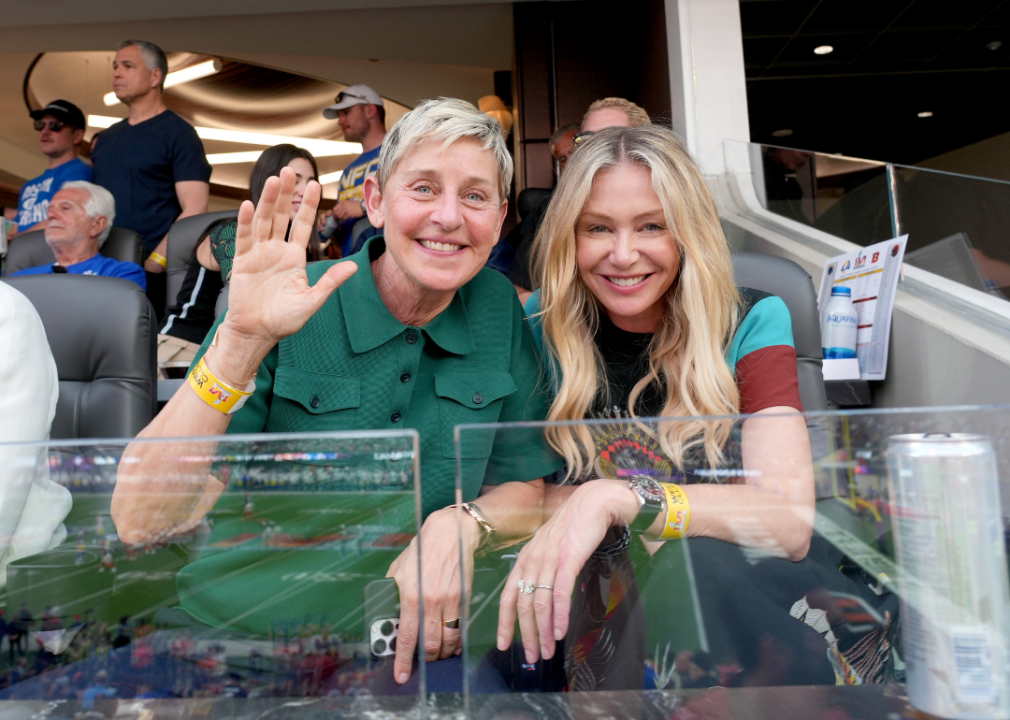 Emmy award-winning Ellen DeGeneres and her spouse Portia de Rossi got married in 2008—during the brief six-month window when same-gendered marriage was legal in California—and have been going strong ever since. DeGeneres made her earnings through standup comedy and TV shows, including her Emmy-winning show, “The Ellen DeGeneres Show.” Together, DeGeneres and de Rossi, an actress, and former model, have purchased and sold over 20 properties since 2003.

You may also like: 50 jobs that no longer exist 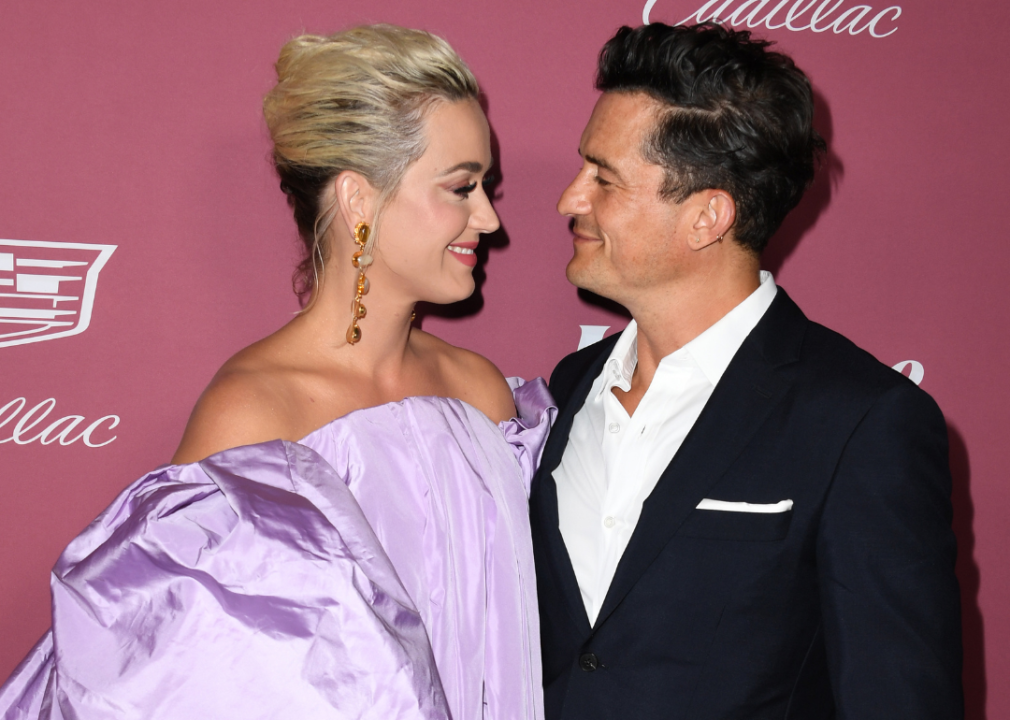 Katy Perry and Orlando Bloom have both achieved significant success in their careers. Bloom’s roles in films like “Lord of the Rings,” “Pirates of the Caribbean,” and “Troy” have made him a household name, especially in the early 2000s. Katy Perry alone is worth $330 million, and she has raked in her earnings from album sales, tours, endorsements, and real estate. 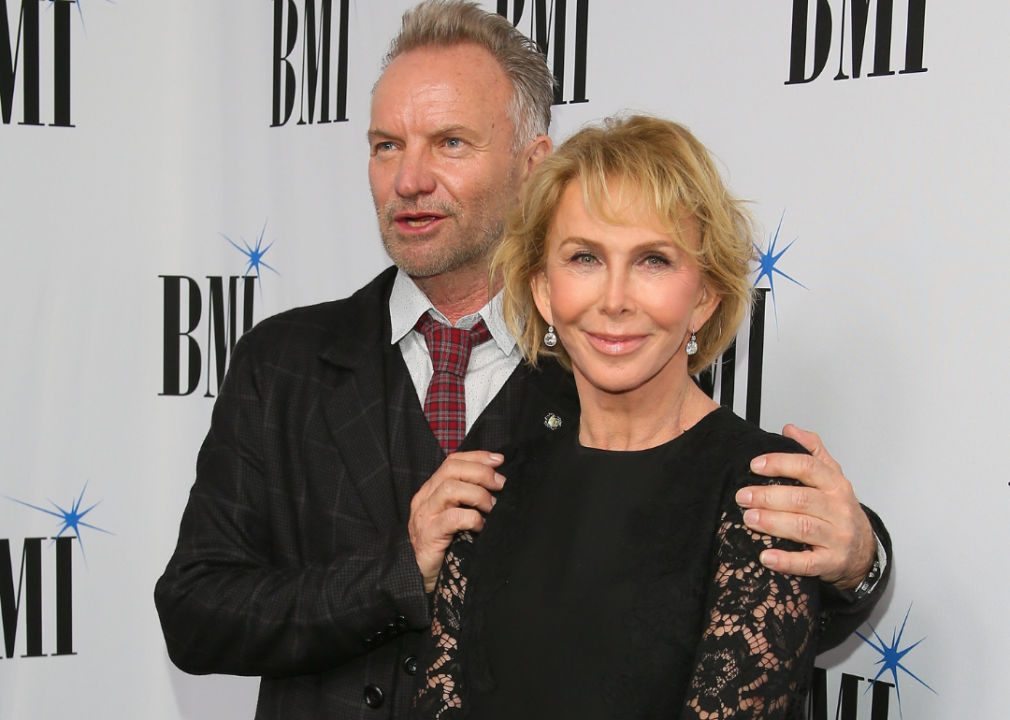 Sting may have grown up in a working-class family in Wallsend, England, but over the years, the musician, singer, and songwriter more than built a name for himself, acquiring fame and fortune. Sting has sold millions of records as a solo artist and as a former frontman for the band Police. His wife, Trudie Styler, is an actress who has appeared in several British TV series and she’s also worked as a producer. 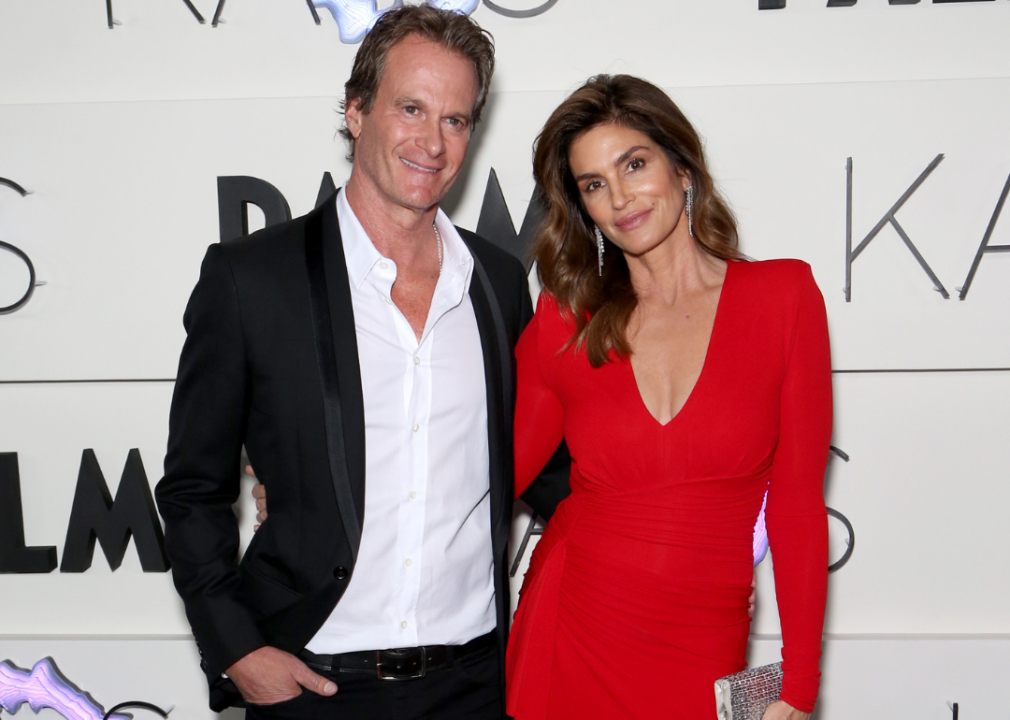 Known for being a modeling legend and entrepreneur, Cindy Crawford amassed her wealth not only by gracing magazine covers and landing campaigns but also by investing in real estate with her husband. Crawford’s husband Rande Gerber is also a former model turned entrepreneur. Together, the couple has purchased properties in Malibu, California, Miami, and Canada. 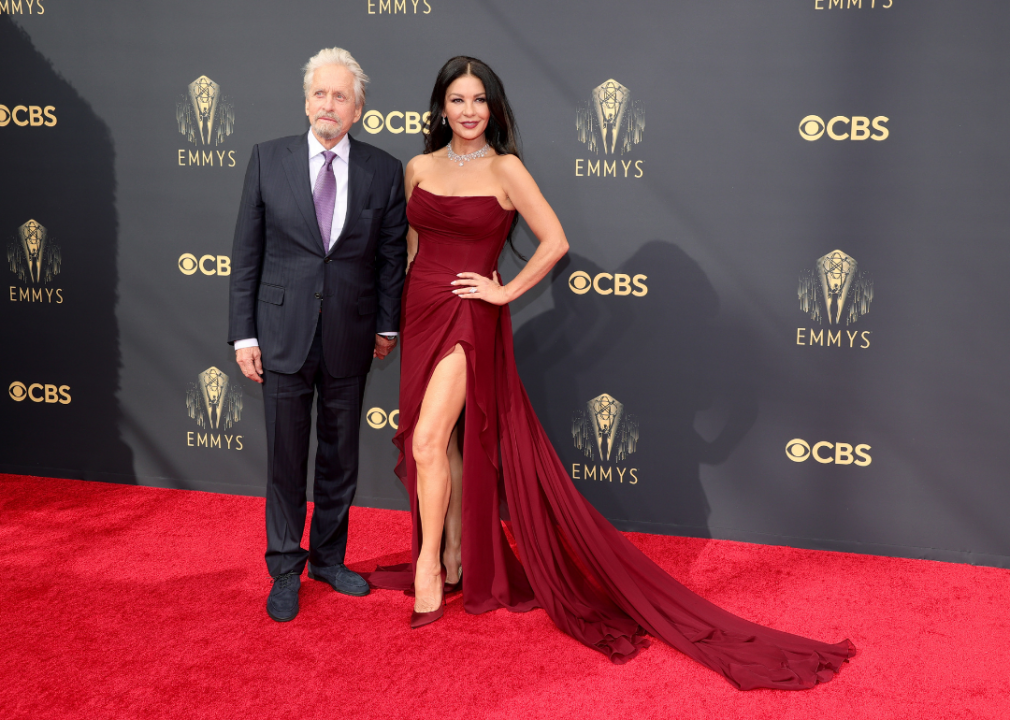 Michael Douglas and Catherine Zeta-Jones got married in 2000 and have been enjoying their luxurious lifestyle together ever since. Douglas has been a major Hollywood star since the ’80s and has also invested in real estate over the years with his actress wife. In 2021, the couple listed their luxury New York City co-op for $45 million. 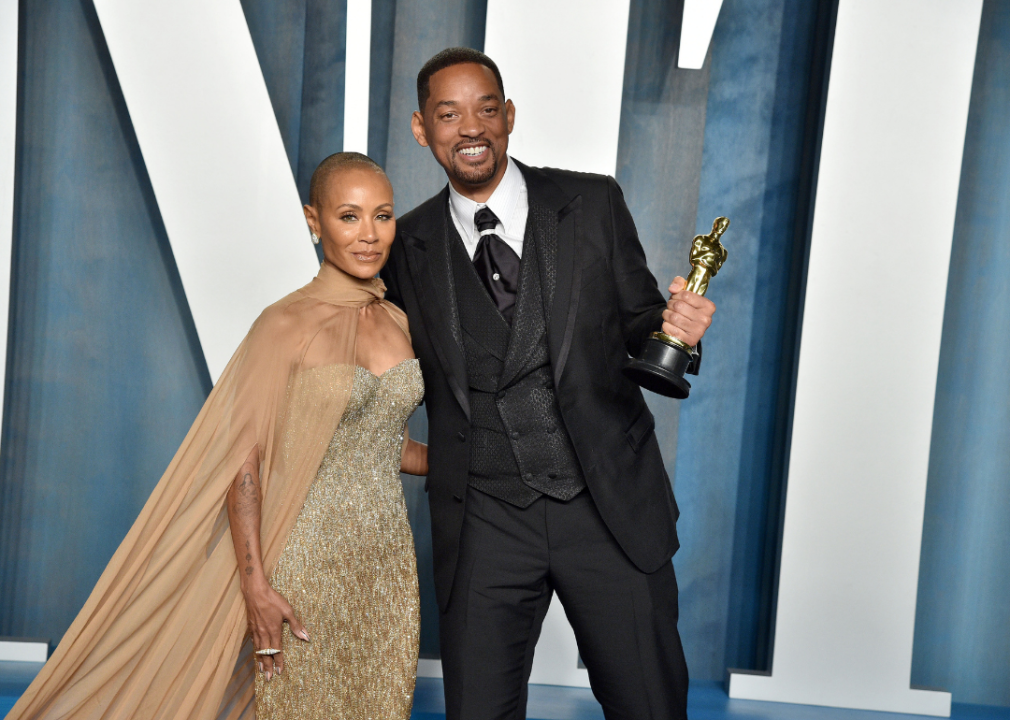 #13. Jada Pinkett Smith and Will Smith

Jada Pinkett Smith and Will Smith married in December 1997 and have become a powerhouse couple ever since, though there have been some public tensions within their relationship in recent years.

Throughout the years, Will earned his millions mostly from film projects but has also raked in earnings from his music career and his first memoir titled “Will.”

Jada alone is worth $50 million and has earned her income through various ventures such as film projects, publishing a children’s book titled, “Girls Hold Up this World,” and being a spokesperson for Carol’s Daughter, a hair care and beauty product line. The couple collectively owns $100 million worth of real estate.

You may also like: Highest-paying jobs that only require a 2-year degree 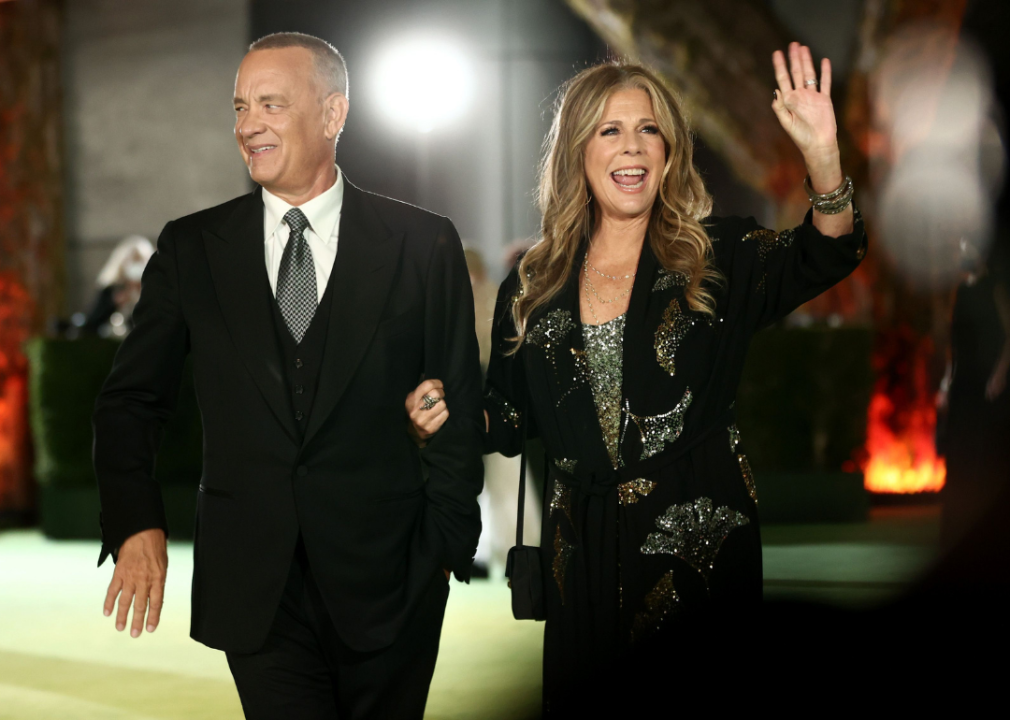 As of 2022, Tom Hanks and Rita Wilson have been married for 34 years, which is rare in Hollywood’s entertainment industry. Over the years, the powerhouse couple collectively acquired their wealth through film projects they’ve starred in or directed as well as real estate purchases. 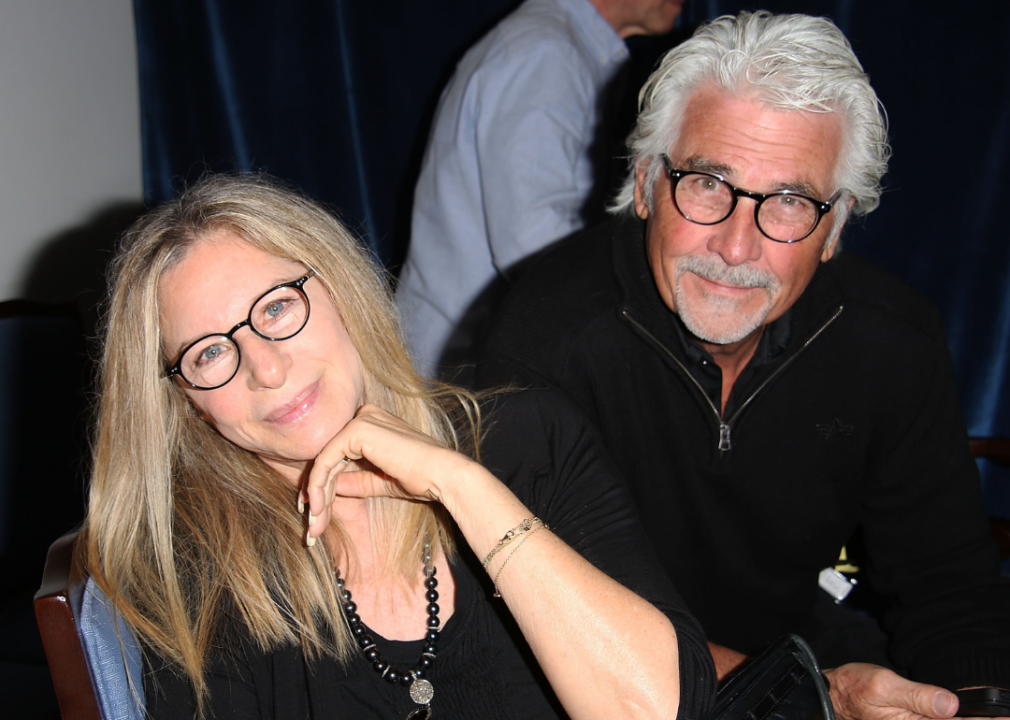 Multi-talented star Barbra Streisand and James Brolin tied the knot at Streisand’s Malibu estate in 1998. Streisand makes a majority of her money from her music and TV career which has spanned close to 60 years. Brolin is an actor, producer, and director who alone is worth $50 million. 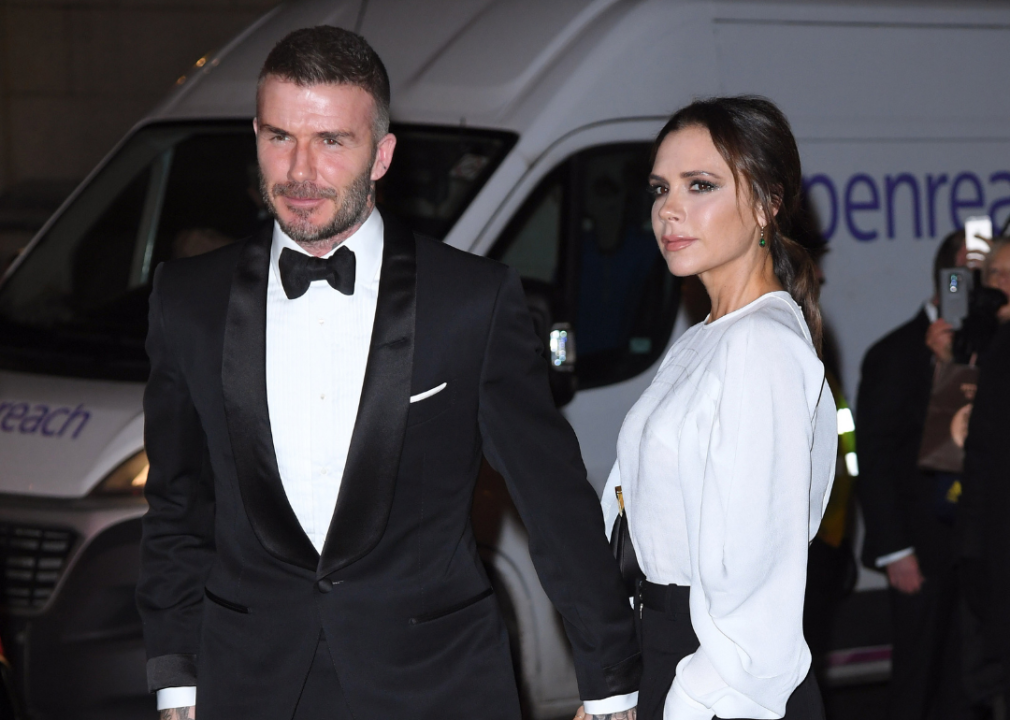 Victoria and David Beckham tied the knot in 1999 after meeting in person for the first time in 1997 at a charity soccer match. Victoria Beckham, who rose to fame as Posh Spice from the popular ’90s British pop group The Spice Girls, grew up wealthy. Her parents owned a profitable electronic wholesale business, but Victoria Beckham would continue acquiring wealth through her own business ventures.

In 2008, Victoria Beckham launched her fashion label, wrote a book, and put out a fragrance line with her husband, who is now a retired soccer player but still makes a $50 million a year salary. 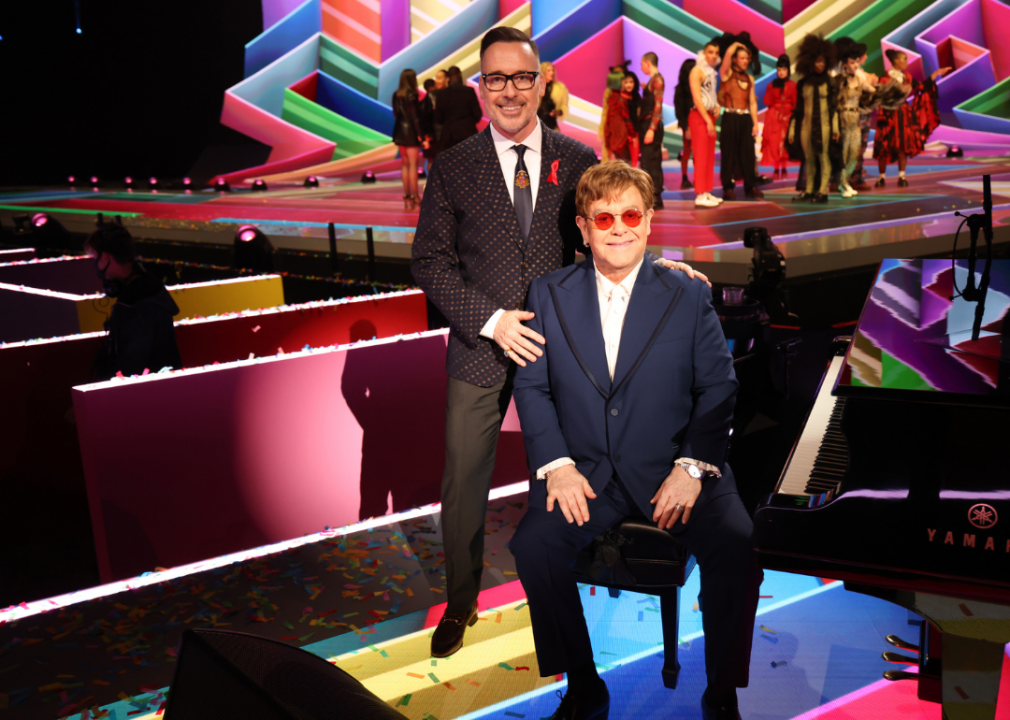 Music icon Elton John and David Furnish, a former advertising executive turned filmmaker, met at a dinner party at John’s home in 1993. They’ve been a couple ever since and over the years, John has sold millions of records. Furnish earned his wealth through his work for the ad agency and from films he has produced and directed. 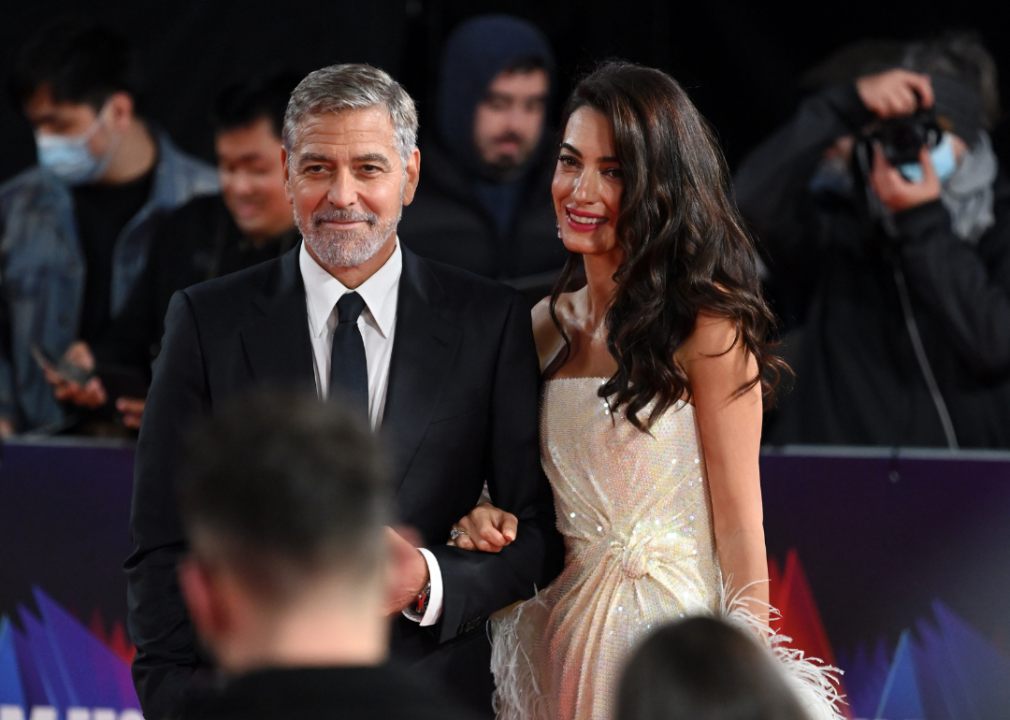 This power couple has been able to amass their fame and fortune through a variety of business ventures and high-profile projects. George Clooney has starred and directed in several films. His British-Lebanese wife, Amal Clooney, alone is worth $50 million, and specializes in international law and human rights. Some of her clients include Nobel Peace Prize winners such as Nadia Murad and women who have survived sexual violence.

You may also like: 50 ways the workforce has changed in 50 years

In February 2022, Tom Brady became the National Football League’s second-highest earning NFL athlete of all time. Brady alone is worth $430 million between his NFL salary and endorsements over the course of his 22-year career. Gisele Bundchen is one of the highest-paid models in the world, having modeled in campaigns for brands such as Ralph Lauren, Valentino, and Versace. 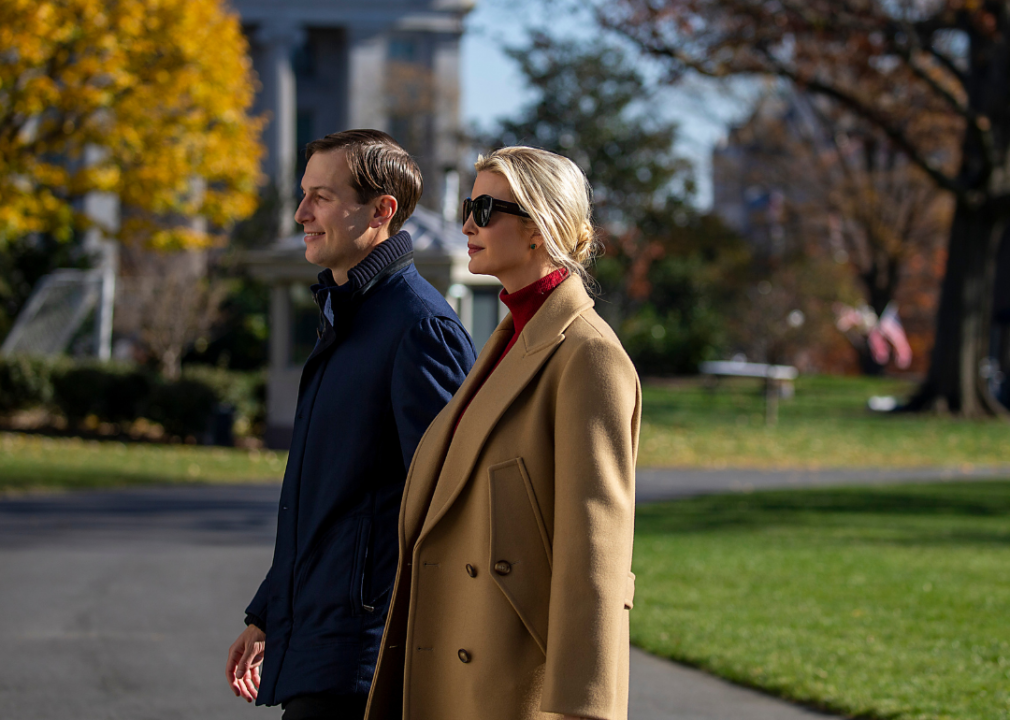 Both Ivanka Trump and Jared Kushner come from influential New York City real estate families. Known as the daughter of former President Donald Trump, Ivanka Trump has an estimated net worth of $300 million. Ivanka has been involved with several business ventures, which include a handbag and footwear line that she sold through Macy’s, Bloomingdale’s, and Nordstrom. Kushner holds a multimillion-dollar stake in Cadre, the real estate startup he co-founded. 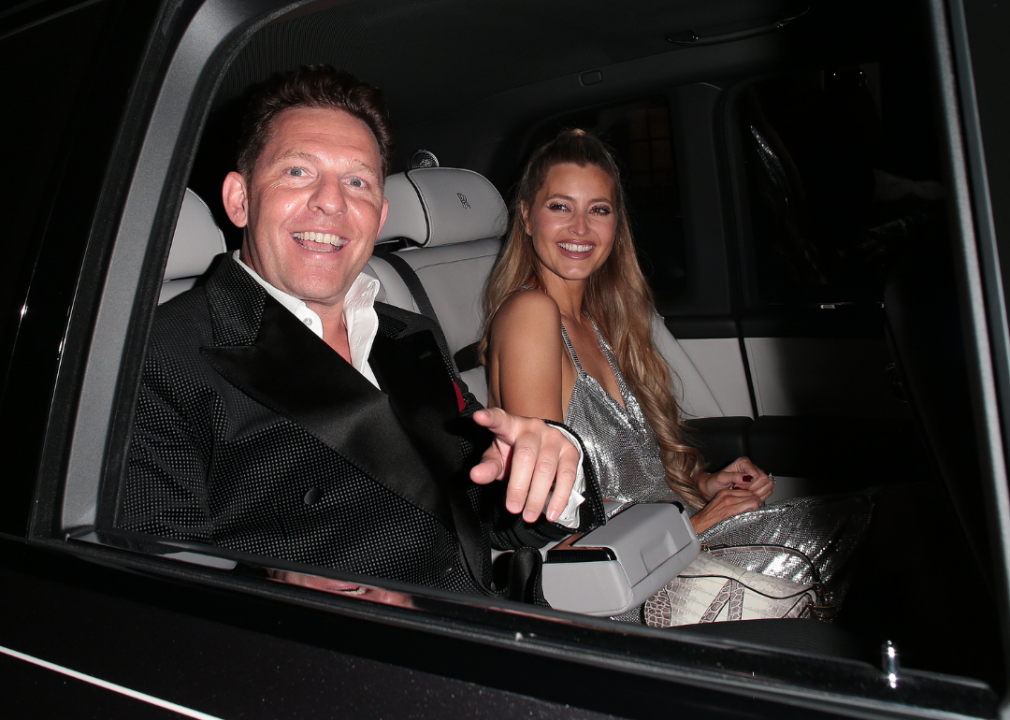 Retired actor and model Holly Valance and luxury property developer Nick Candy’s relationship oozed wealth from the beginning with their lavish Beverly Hills wedding in 2012, attended by guests such as Elton John with a performance by Katy Perry. Nick Candy, along with his brother Christian Candy, owns several high-rise buildings all over the world. Valance created her own wealth, having been featured in TV shows such as “CSI: NY,” “CSI: Miami,” and “Prison Break.” 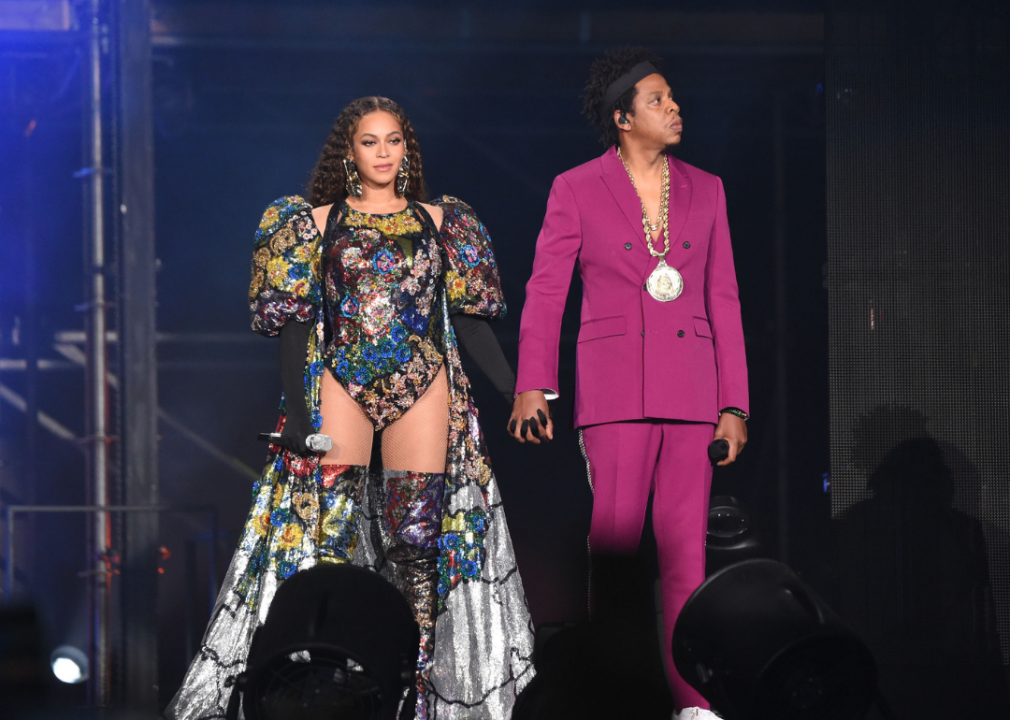 Beyoncé Knowles-Carter and Jay-Z, also known as The Carters, have done pretty well for themselves, collectively growing a portfolio of businesses that span music, real estate, and brand endorsements. Beyoncé’s net worth alone is $500 million through her music, films, investments, and other business ventures. Jay-Z has amassed his own net worth of $1 billion, making him one of the few entertainers to achieve financial status of that value. 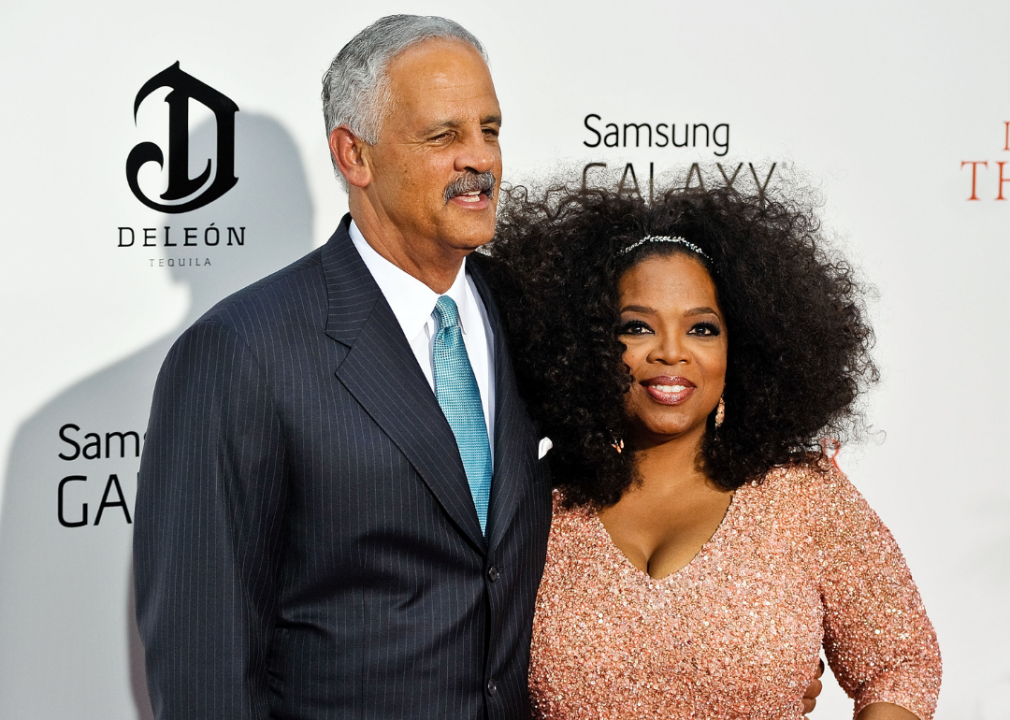 Oprah Winfrey and Stedman Graham first met each other at a charity event in Chicago in 1986. It was the same year the iconic “Oprah Winfrey Show” debuted on television and was nationally syndicated for several years, catapulting her to multi-millionaire status, far from her childhood years of financial struggle in rural Mississippi. Graham alone is worth $10 million as a speaker, author of several self-help books, and businessman. 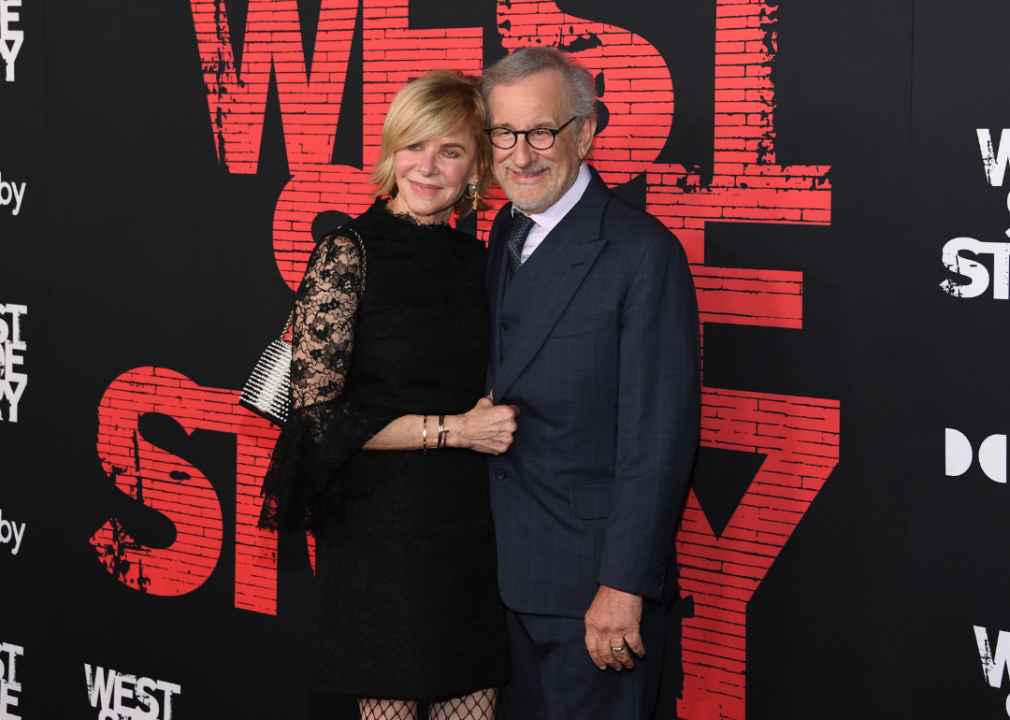 Stephen Spielberg, one of the most iconic film producers of all time, met actor Kate Capshaw back in 1984 when she was auditioning for a role in the 1984 film, “Indiana Jones and the Temple of Doom.” The couple has achieved significant success throughout their careers and owns properties in various locations including Naples, Florida, and Pacific Palisades, California. 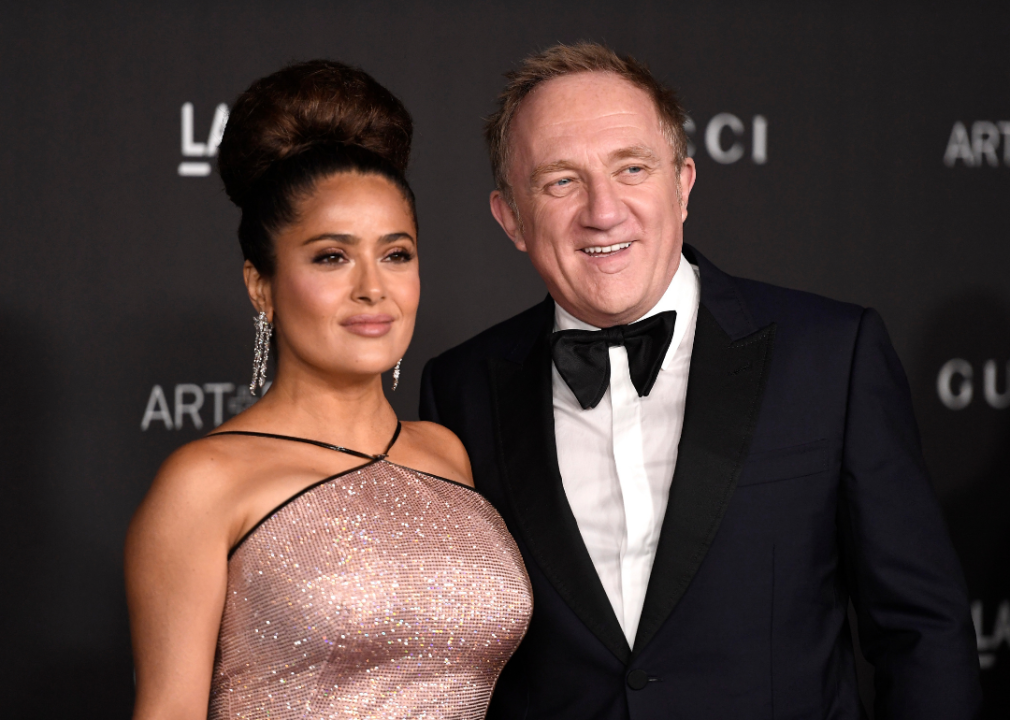 Mexico-born actor Salma Hayek moved to Los Angeles in 1991 and has starred in several films ever since. Hayek also founded her own production company in 1999, called Ventanarosa. Hayek and Francois Pinault, a multi-billionaire entrepreneur who founded the luxury fashion group Kering, and who owns the French winery, Chateau Latour, have been married since 2009.

This article originally appeared on Stacker